The lights at the Allina Clinic Crossroads are once again lit up in purple, the color of this community.
Wednesday has been a day to reflect and remember, and also move forward.

“It’s still hard to believe a year ago I said goodbye to my wife,” Donnie Overbay recalls.

Overbay is the husband of Lindsay Overbay, the healthcare worker killed during the shooting one year ago.

He now lives with his two children near his family, in Oklahoma.

“I’m trying to do more things with my family and move forward with my life at this point,” he shared. 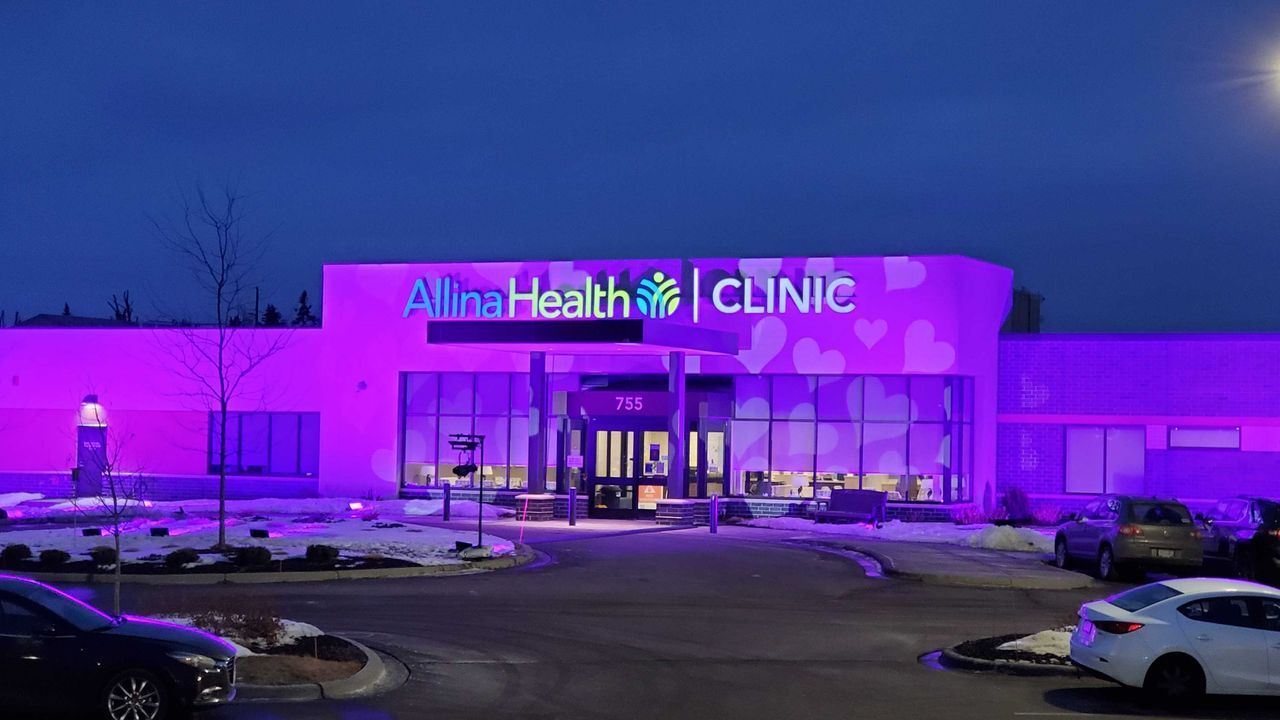 The Allina Clinic in Buffalo is lit in purple to mark the anniversary of a fatal shooting that killed a medical assistant.

A table filled with T-shirts, keychains, cookies and sunflower seeds from the sunflower field planted next to the clinic, are for sale at Natural Roots Salon, with all of the proceeds going to the shooting victims.

Owner Kelsie Schoenecker says this last year, while horrific, has created some positives for the community.

“I actually think it has brought the community a lot closer so I think a lot of people like to help out, and it does come up often in the salon, because it was such an impactful event,” she said.

As part of the days remembrance, former NHL goaltender, Clint Malarchuk, is in Buffalo and speaking to the community about mental health issues and perseverance.

Malarchuk nearly died twice, once on the ice after a skate sliced his neck during a hockey game, and years later by an attempted suicide.

“Being a suicide survivor I believe God spared me for those that are still suffering in darkness and silence because of the stigma surrounding mental illness or emotional distress,” Malarchuk said.

He said he is grateful to be in Buffalo helping the community heal.

“Setting aside a time like this for the community to come together, it’s a time to generate that healing,” he said.

Gregory Ulrich is accused of walking into the clinic and opening fire, and also setting off two explosives.

Tuesday night, the clinic and hospital were lit up in purple from 4 p.m. – 11 p.m., and will be purple again during those hours on Wednesday.

Allina Health issued the following statement Wednesday morning to mark the one-year observance of the shooting.

It is hard to believe that Feb. 9 marks one year since the violent event at Allina Health Clinic – Buffalo Crossroads. This senseless tragedy took Lindsay Overbay from her family, resulted in injuries to four of our team members and deeply affected our Buffalo Crossroads team. Over the past year, all those impacted have experienced deep grief and trauma. There has also been an outpouring of love and support, time and space for reflection, and for many, renewed resilience and strength.

According to the criminal complaint, police were called to Allina Clinic Crossroads at 10:54 a.m. on the morning of Feb. 9, 2021 on the report of an active shooting.

Minutes later, Ulrich called county dispatch and said he would surrender himself to officers. Officers approached the building using a squad car as a shield and found Ulrich lying down with his arms out. When officers searched Ulrich, they found a firearm and ammunition.

Responding officers found five victims inside the clinic who suffered gunshot wounds during a search of the building. All of the victims were taken to hospitals in the Twin Cities. One victim, identified as Overbay, died while at Hennepin County Medical Center.

During the search, officers also found two instances of damage to the building that were consistent with explosions. An undetonated improvised explosive device was also found in the building, according to the complaint.

Further investigation revealed Ulrich entered the clinic where he was met by staff. Ulrich then pulled out a handgun and began threatening clinic staff.

Investigators were also able to confirm that Ulrich detonated two improvised explosive devices while in the clinic.

A search of Ulrich’s phone revealed video a message made by Ulrich that “alluded to the incident at the clinic,” according to the complaint.

Court and police records show Ulrich had made threats against the clinic in the past.