Biden: NATO more united than ever over Ukraine

President Joe Biden says that Russian President Vladimir Putin was wrong to assume NATO would be divided over Ukraine.

Biden says at a news conference that Russia’s invasion of Ukraine has built greater unity within NATO, the European Union and the Group of Seven economies.

Biden says of Putin, “He didn’t think we could sustain this cohesion,” adding that NATO has “never been more united than it is today.”

NATO countries and other allies have imposed harsh sanctions against Russia, crippling that country’s economy. Still, the EU has refrained from taking the same steps as the U.S. by banning oil and natural gas from Russia.

President Joe Biden and Western allies pledged new sanctions and humanitarian aid on Thursday in response to Vladimir Putin’s assault on Ukraine, but their offers fell short of the more robust military assistance that President Volodymyr Zelenskyy pleaded for in a pair of live-video appearances. 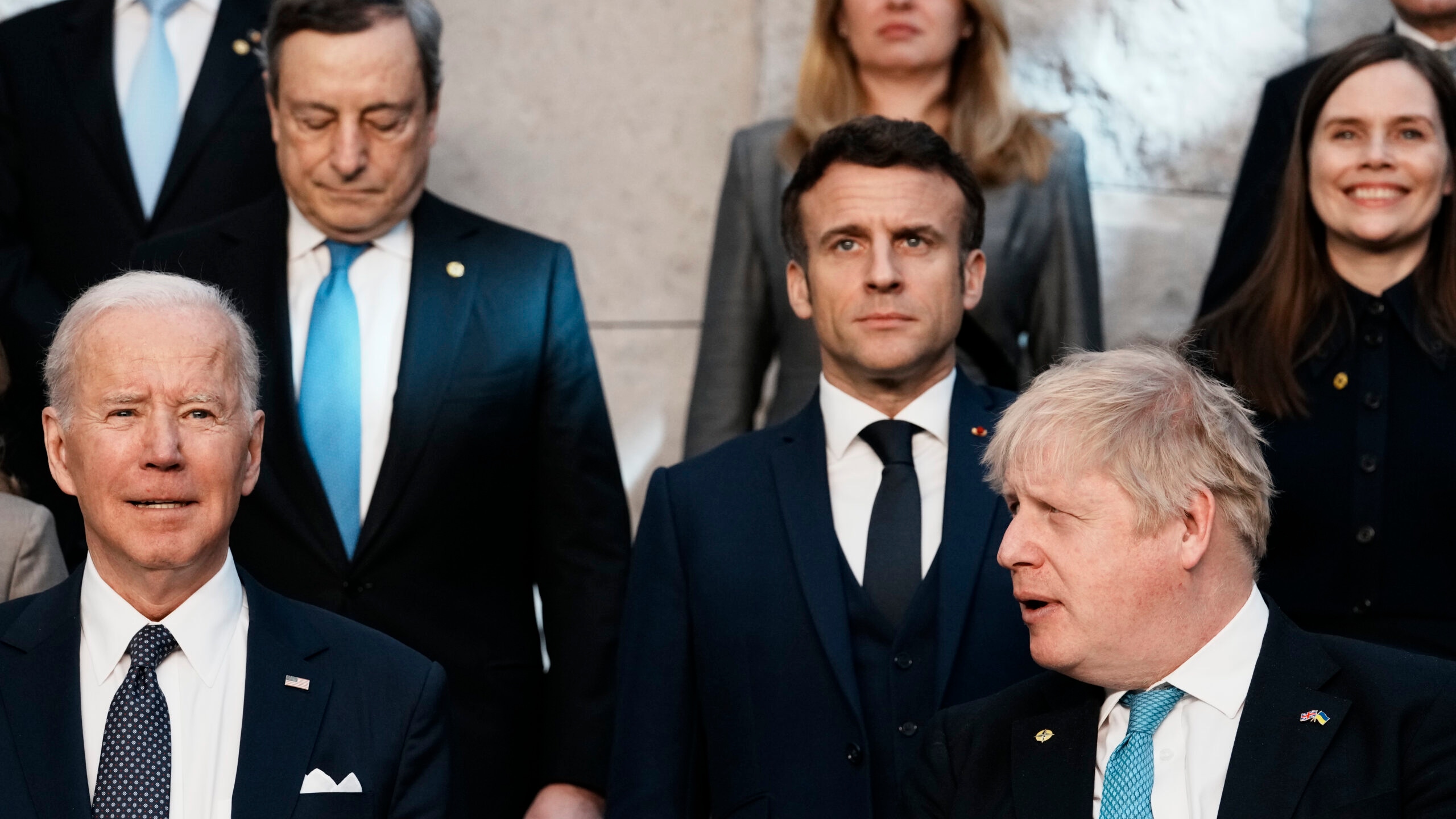 British Prime Minister Boris Johnson, front right, looks toward U.S. President Joe Biden, front left, at a group photo during an extraordinary NATO summit at NATO headquarters in Brussels, Thursday, March 24, 2022. As the war in Ukraine grinds into a second month, President Joe Biden and Western allies are gathering to chart a path to ramp up pressure on Russian President Vladimir Putin while tending to the economic and security fallout that's spreading across Europe and the world. (AP Photo/Thibault Camus)

The leaders spent Thursday crafting their next steps to counter Russia’s month-old invasion — and huddling over how they might respond should Putin deploy chemical, biological or even a nuclear weapon. They met in a trio of emergency summits that had them shuttling across Brussels for back-to-back-to-back meetings of NATO, the Group of Seven industrialized nations and the 27-member European Council.

Zelenskyy, while thankful for their help, made clear to the Western allies he needed far more than they’re currently willing to give.

U.S President Biden, who was attending all three summits, said more aid was on its way. But Western leaders also suggested they were treading carefully so as not to further escalate the conflict beyond the borders of Ukraine.

“NATO has made a choice to support Ukraine in this war without going to war with Russia,” said French President Emmanuel Macron. “Therefore we have decided to intensify our ongoing work to prevent any escalation and to get organized in case there is an escalation.”

Billions of dollars of military hardware has already been provided. A U.S. official, who requested anonymity to discuss internal deliberations, said Western nations were discussing the possibility of providing anti-ship weapons amid concerns that Russia will launch amphibious assaults along the Black Sea coast.

“We are committed to identifying additional equipment, including air defense systems, to help Ukraine,” Biden said in a written statement after the NATO meeting.

Separately, the White House announced the U.S. would welcome 100,000 Ukrainian refugees and provide an additional $1 billion in food, medicine, water and other supplies.

Finland announced Thursday it would send more military equipment to Ukraine, its second shipment in about three weeks. And Belgium announced it will add one billion euros to its defense budget in response to Russia’s invasion..

At the same time, Washington will expand its sanctions on Russia, targeting members of the country’s parliament along with defense contractors. The U.S. will also work with other Western nations to ensure gold reserves held by Russia’s central bank are subject to existing sanctions.

With Russia facing increasing international isolation, NATO Secretary-General Jens Stoltenberg also warned China against coming to Moscow’s rescue. He called on Beijing “to join the rest of the world and clearly condemn the brutal war against Ukraine and not support Russia.”

But Stoltenberg also made clear that the West had a “responsibility to prevent this conflict from becoming a full-fledged war in Europe.”

The possibility that Russia will use chemical or even nuclear weapons has been a grim topic of conversation in Brussels, but a possibility leaders were preparing for.

White House officials said that both the U.S. and NATO have been working on contingency planning should Russia deploy nonconventional weaponry. NATO has specially trained and equipped forces ready to be deployed if there should be such an attack against a member nation’s population, territory, or forces.

Stoltenberg said that NATO leaders agreed Thursday to send equipment to Ukraine to help protect it against a chemical weapons attack.

“This could include detection equipment, protection and medical support, as well as training for decontamination and crisis management,” he said.

Biden before departing for Europe on Wednesday said that the possibility of a chemical attack was a “real threat.” In addition, Kremlin spokesman Dmitry Peskov told CNN this week that Russia could consider using its nuclear weapons if it felt there were “an existential threat for our country.”

Finland’s Prime Minister Sanna Marin on Thursday warned, “Russia is capable of anything.”

The Russian invasion has spurred European nations to reconsider their military spending, and Stoltenberg opened the NATO summit by saying the alliance must “respond to a new security reality in Europe.”

are united in condemning the Kremlin’s unprovoked aggression and in our support for Ukraine’s sovereignty and territorial integrity.”

While the West has been largely unified in confronting Russia after it invaded Ukraine, there’s wide acknowledgement that unity will be tested as the costs of war chip at the global economy.

The bolstering of forces along NATO’s eastern flank, almost certainly for at least the next five to 10 years if Russia is to be effectively dissuaded, will put pressure on national budgets.

The energy crisis exacerbated by the war will be a particularly hot topic at the European Council summit, where leaders from Spain, Portugal, Italy and Greece are hoping for an urgent, coordinated bloc-wide response. EU officials have said they will seek U.S. help on a plan to top up natural gas storage facilities for next winter, and they also want the bloc to jointly purchase gas.

German Chancellor Olaf Scholz has dismissed calls to boycott Russian energy supplies, saying it would cause significant damage to his country’s economy. Scholz is facing pressure from environmental activists to quickly wean Germany off Russian energy, but he said the process will have to be gradual.

“To do so from one day to the next would mean plunging our country and all of Europe into recession,” Scholz said Wednesday.

Ursula von der Leyen, head of the European Union’s executive arm, said before Biden’s visit that she wanted to discuss the possibility of securing extra deliveries of liquefied natural gas from the United States for the 27-nation bloc “for the next two winters.”

The EU imports 90% of the natural gas used to generate electricity, heat homes and supply industry, with Russia supplying almost 40% of EU gas and a quarter of its oil. The bloc is looking at ways to reduce its dependence on Russian gas by diversifying suppliers.

Poland and other eastern flank NATO countries will also be seeking clarity on how the U.S. and fellow European nations can assist in dealing with their growing concerns about Russian aggression as well as a spiraling refugee crisis. More than 3.5 million refugees have fled Ukraine in recent weeks, including more than 2 million to Poland.

Biden is scheduled to visit Poland on Friday, where the energy and refugee issues are expected to be at the center of talks with President Andrzej Duda.

Four new NATO battlegroups, which usually number between 1,000-1,500 troops, are being set up in Hungary, Slovakia, Romania and Bulgaria.

Thursday marks one month since the invasion into Ukraine was launched. Associated Press photographers have been there every day. View their photos below. Warning: some of them depict graphic scenes.