As rules ease, travelers head to US for emotional reunions

The U.S. lifted restrictions Monday on travel from a long list of countries including Mexico, Canada and most of Europe, setting the stage for emotional reunions nearly two years in the making and providing a boost for the airline and tourism industries decimated by the pandemic.

Wives will hug husbands for the first time in months. Grandmas will coo over grandsons who have doubled in age since they last saw them. Aunts and uncles and cousins will snuggle babies they haven’t met yet.

"I’m going to jump into his arms, kiss him, touch him," Gaye Camara said of the husband in New York she has not seen since before COVID-19 brought the fly-here-there-and-everywhere world to a halt.

"Just talking about it makes me emotional," Camara, 40, said as she wheeled her luggage through Paris’ Charles de Gaulle airport, which could almost be mistaken for its pre-pandemic self, busy with humming crowds, albeit in face masks.

The rules that go into effect Monday allow air travel from a series of countries from which it has been restricted since the early days of the pandemic — as long as the traveler has proof of vaccination and a negative COVID-19 test. Those crossing land borders from Mexico or Canada will require proof of vaccination but no test. 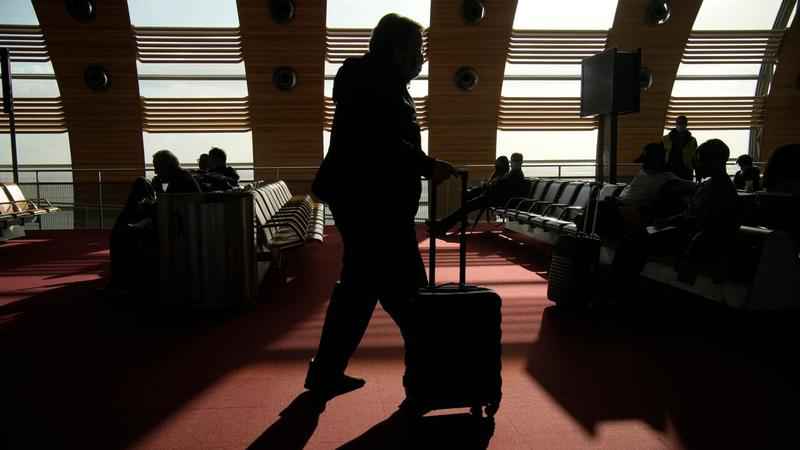 A passenger for United States wheels his luggage in the waiting zone before boarding a flight in the Charles de Gaulle airport, north of Paris, Monday, Nov.8, 2021. The U.S. lifted restrictions Monday on travel from a long list of countries including Mexico, Canada and most of Europe, allowing tourists to make long-delayed trips and family members to reconnect with loved ones after more than a year and a half apart because of the pandemic.[AP Photo/Christophe Ena]

When Camara last saw Mamadou, her husband, in January 2020, they had no way of knowing that they’d have to wait 21 months before holding each other again. She lives in France’s Alsace region, where she works as a secretary. He is based in New York.

"It was very hard at the beginning. I cried nearly every night," she said.

"I cannot wait," she said. "Being with him, his presence, his face, his smile."

Airlines are preparing for a surge in activity after the pandemic and resulting restrictions caused international travel to plunge. Data from travel and analytics firm Cirium showed airlines are increasing flights between the United Kingdom and the U.S. by 21% this month over last month.

In a sign of the huge importance of trans-Atlantic travel for airlines, British Airways and Virgin Atlantic celebrated the reopening by synchronizing the departures of their early-morning flights to New York on parallel runways at London’s Heathrow Airport. BA CEO Sean Doyle was aboard his company’s plane.

"Together, even as competitors, we have fought for the safe return of trans-Atlantic travel — and now we celebrate that achievement as a team. Some things are more important than one-upmanship, and this is one of those things," Doyle wrote in a message to customers, noting that the flight carried the number that used to belong to the supersonic Concorde.

For Martine Kerherve, being separated from loved ones in the United States was filled with worries that they might not survive the pandemic that has killed more than 5 million people worldwide.

"We told ourselves that we could die without seeing each other," said Kerherve, who was heading for Fort Lauderdale, Florida, from Paris. "We all went through periods of depression, anxiety."

Before the pandemic, it was a trip Kerherve and her partner, Francis Pasquier, would make once or twice a year. When they lost that, "we lost our bearings," Pasquier said.

Maria Giribet, meanwhile, has not seen her twin grandchildren Gabriel and David for about half of their lives. Now 3 1/2, the boys are in San Francisco, which during the height of the pandemic might as well have been another planet for 74-year-old Giribet, who lives on the Mediterranean isle of Majorca.

"I’m going to hug them, suffocate them, that’s what I dream of," Giribet said after checking in for her flight. A widow, she lost her husband to a lengthy illness before the pandemic and her three grown children all live abroad.

"I found myself all alone," said Giribet, who was flying for the first time in her life by herself.

Canadians have been able to fly into the United States for nonessential reasons throughout the pandemic but flights have been limited.

Nick Drews flew into Minneapolis-St. Paul International Airport from Winnipeg to see his girlfriend on Monday. He said the expansion of international travel gives him more options for air travel to Minnesota.

“It’s exciting, relieving I guess. Once everything’s more back to normal, it’ll be nice,” Drews said.

While tourists from Canada have been able to travel by air to the U.S., they have not been able to drive in through any of the land borders.

The borders with Canada and Mexico reopened for nonessential travel Monday.

“This is a day I have been obsessively waiting on for quite a while,” Minnesota Sen. Amy Klobuchar said.

Klobuchar spoke to the media Monday in St. Paul, alongside members of Explore Minnesota and the Consulate General of Canada in Minneapolis.

They said international travel resuming is a milestone to celebrate in recovering from the pandemic.

"Canada is the top international market for visitors to Minnesota,” said Leann Kispert, interim director of Explore Minnesota. “Minnesota has lost $10.7 billion in travel spending since January of 2020. International travel, especially from Canada, is a vital component of the ongoing recovery of Minnesota’s tourism industry.”

Malls, restaurants and Main Street shops in U.S. border towns have been devastated by the lack of visitors from Mexico. On the boundary with Canada, cross-border hockey rivalries that were community traditions were upended. Churches that had members on both sides of the border are hoping to welcome parishioners they haven’t seen in nearly two years.

River Robinson’s American partner wasn’t able to be in Canada for the birth of their baby boy 17 months ago. She was thrilled to hear about the U.S. reopening.

"I’m planning to take my baby down for the American Thanksgiving," said Robinson, who lives in St. Thomas, Ontario. "If all goes smoothly at the border, I’ll plan on taking him down as much as I can."

It’s "crazy to think he has a whole other side of the family he hasn’t even met yet," she added.

The U.S. will accept travelers who have been fully vaccinated with any of the shots approved for emergency use by the World Health Organization, not just those in use in the U.S. That’s a relief for many in Canada, where the AstraZeneca vaccine is widely used.

But millions of people around the world who were vaccinated with Russia’s Sputnik V, China’s CanSino or others not OK’d by the WHO won’t be able to travel to the U.S.

The moves come as the U.S. has seen its COVID-19 outlook improve dramatically in recent weeks since the summer delta surge that pushed hospitals to the brink in many locations.

Those in the travel industry hope it will provide a boost after COVID-19 travel bans brought the sector to its knees.

Travel agent Francis Legros, flying from Paris to a travel industry convention in Las Vegas, jetted off determined to breathe life back into his company.

"We are rebuilding," he said. "It’s a new chapter, a new professional life."