“It’s really important that people are able to test for COVID as soon as possible, as easily as possible,” says Dr. Hannah Lichtsinn, a pediatric physician with Hennepin Healthcare. “With omicron spreading through the Twin Cities, so many people are getting exposed, or developing some symptoms from COVID.”

The Minnesota Department of Health now calls the omicron variant the dominant strain in the state.

MDH says the Anoka facility is capable of accommodating 800 people a day. 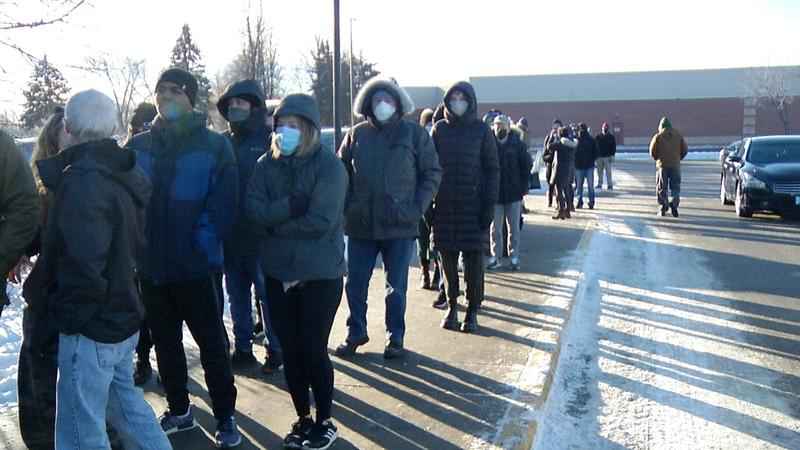 August Pearson was among those in line Saturday afternoon.

"I did it a couple of months ago, same saliva test and everything,” he says. “So I knew what it was going to be for the most part, so it was pretty quick."

Pearson says his workplace requires a COVID test after calling out sick and that his usual pharmacy ran out of at-home tests.

"I don’t think I have [COVID], but even if I did have it, wouldn’t be the end of the world, but I don’t want to have it,” Pearson explains.

The health department says more than 16.3 million tests have been administered since the beginning of the pandemic.

But why all the urgency now for COVID testing?

Lichtsinn says one reason is that the omicron variant is spreading rapidly during the cold and flu season.

"Omicron can be so dangerous to certain groups of people, especially the unvaccinated,” she says. “It is nearly impossible to tell mild omicron apart from a cold or in general, apart from influenza, the normal respiratory flu virus that we see without a test."

That sets up a COVID quandary for those who feel they’re getting sick.

"It’s less likely that people are going to necessarily stop themselves and say oh my God, I have COVID, I’d better not spread it to people,” notes Dr. Zeke McKinney, a HealthPartners physician. “For that reason, testing is so critical, so that people can know in fact they may be infectious, and not going out and spreading it to others."

McKinney says because of mutations in omicron’s spike proteins, it’s more transmissible — and reproduces differently from other strains.

"It’s thought to replicate a lot higher in the airway, not all the way deep into the lungs, which is why we’re not seeing also as much severe lung infection,” he explains. “It reproduces higher in the lungs and at a faster rate, and thus people are becoming more infectious, they’re spreading the virus more in that way."

Amid the increase in testing, a new concern: Unregulated pop-up testing sites that authorities say may be a cover for identity theft.

ABC News is reporting staffers at those sites claimed they were funded by the Federal Emergency Management Agency.

Alex Pearlstein says he visited one of the pop-up tents late last month.

“The tent was a little bare,” he recalled. “It was just like a black tent, and the table was as well. They had like a sign taped to the front, but there wasn’t much else.”

Pearlstein says his result was negative but started showing symptoms soon after.

An additional test came back positive, he says.

“It didn’t even cross my mind that this wouldn’t be legit,” Pearlstein says.

Illinois health officials are also sharing concerns about the pop-ups.

“There unfortunately are those who are taking advantage of these crazy times by trying to scam people,” declared Dr. Ngozi Ezike, the director of the Illinois Department of Public Health.

"Are people setting up bogus clinics, or offering bogus medicine, or maybe giving misinformation about vaccines, that’s all happening, and I would essentially call that war profiteering,” McKinney says.

Experts say it’s safest to get tested at a government or healthcare-run site.

"If it’s at a health care center, so a clinic or hospital of course you know that’s reputable. If it’s at a health department-sponsored site, that’s also a guarantee that that’s a responsible, high-quality testing site,” Lichtsinn says. “I don’t think this is ever completely going away. Especially in the next couple of years, we’re going to need to be prepared for having time to retake some of these same precautions, and are more careful, depending on what happens.”