5 INVESTIGATES identified the purchases in a review of more than 1,400 spending reports from cities, towns and counties, which detailed their use of funding received through the Coronavirus Aid Relief and Economic Security (CARES) Act.

Those expenses could potentially be flagged during upcoming audits since the federal government made it clear that such funding could only be used to cover "expenditures due to the public health emergency."

"There are going to be scenarios that probably are troublesome," former state auditor Rebecca Otto said. "The general rule that I always said to local officials was, ‘Make sure it passes the smell test.’" 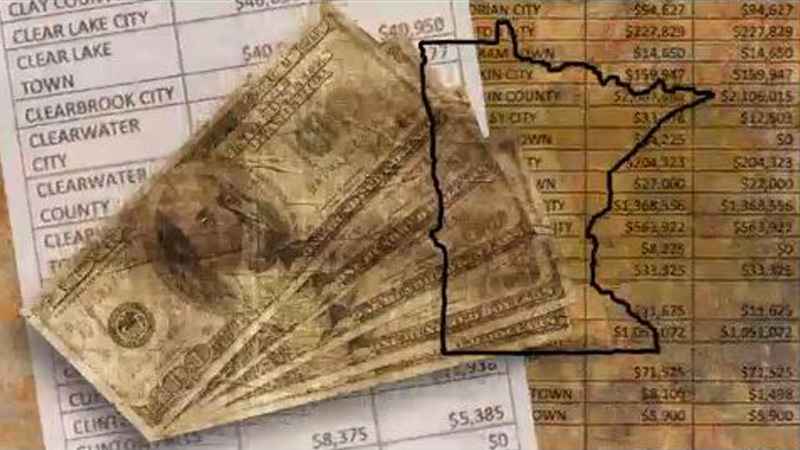 The Big Lake Police Department used a portion of the city’s $863,000 in CARES Act funding to purchase items such as riot shields, rams, pepper spray (OC aerosol), pepper balls and ballistic bunkers worth at least $8,000.

In a memo to the city’s finance director, Big Lake Police Chief Joel Scharf cited "civil unrest" as a reason for some of the expenditures and wrote, "The COVID-19 Event has contributed directly to widespread unrest and anticipated future unrest."

"COVID is not why we’re seeing civil unrest," Koha-Jallah said.

Weeks after the death of George Floyd in Minneapolis last year, she led protestors down Highway 10 in Big Lake, briefly causing police to reroute traffic in the area.

Police logs show no record of any arrests or property damage on the day of the protest. A month later, in another memo titled "current and proposed CARES Act purchases," the chief outlined needs for "civil disorder control."

Scharf declined an interview request. Additionally, Big Lake’s mayor, city council members and city administrator all either declined interviews or did not respond to requests from 5 INVESTIGATES.

In an email, City Administrator Clay Wilfahrt made no reference to "civil unrest" and instead defended the police department’s spending of CARES Act money as a response to four armed standoffs in 2020 and what he described as an "increase in the severity of mental health calls." He used the same justification for using about $3,000 of COVID relief funds to send two officers to "negotiators school" with the National Tactical Officers Association in Oklahoma.

‘There will be questions’

Other cities also spent CARES Act money in ways that do not appear to be directly related to the pandemic.

Goodhue Police used federal funds to cover part of the cost of new Axon body cameras, which the city clerk later said was needed to prevent officers from sharing equipment.

A 5 INVESTIGATES report in December prompted city leaders in Forest Lake to scrap plans to use COVID relief money to build a clubhouse on the city-owned golf course.

Tom Schatz, president of the Washington, D.C.-based Citizens Against Government Waste, said he believes the police purchases, in particular, fall outside the category of "COVID relief."

"There are programs already to provide that kind of equipment to police through the Justice Department," Schatz said. "Certainly, the riots last summer were reason to help state and local law enforcement, but that’s not related to COVID-19. Maybe some people would argue (that it is), but it really isn’t."

Otto, the former state auditor, didn’t offer an opinion on the specific use of CARES Act money by Big Lake or others, but noted that local governments were under pressure to use the federal funds in a short amount of time with limited guidance.

"I think leaders were trying to do their best in an unprecedented situation but there will be questions," Otto said.

In a statement, Minnesota and Management and Budget (MMB) spokesperson Ellen Anderson said any local government that received CARES Act money could be subject to a review or audit by the U.S. Treasury Office of the Inspector General.

"Those that spent more than $750,000 in federal funds are subject to a required audit to determine the eligibility of expenses," Anderson added. "Ineligible expenses must be repaid or substituted for eligible ones."

Out of the $841 million in CARES Act money given to local governments in Minnesota, 5 INVESTIGATES found many also provided grants to small businesses and emergency needs directly related to the pandemic.

The small city of Barnesville, in Clay County, reported that it provided free internet service to families with school-aged children who could not otherwise afford it.

Several other cities, including Crystal, used all of its relief money to cover payroll costs for first responders, including police – an expenditure the Treasury specifically approved in its guidance to local governments.

Crystal Police Chief Stephanie Revering said her department and others have felt the impact of the pandemic.

"Unfortunately, we did have some officers who developed COVID within the department," Revering said.

She noted that the city did have some looting after the death of George Floyd in Minneapolis in May, but the department did not consider using CARES Act funds to address those issues.

"To us, it was pretty specific what the CARES Act money was supposed to be used for and that was specifically for COVID," Revering said.

When asked whether that event intersected with civil unrest, Revering replied, "Not in my opinion, no."