Jury selection for the trial of Kim Potter began Tuesday, and the first four jurors were chosen. The defense also told jurors that Potter will testify in her own defense during the trial.

Hennepin County District Judge Regina Chu talked to the first panel of seven potential jurors at about 9:20 a.m. and explained the logistics of the case and the process of jury selection, and jury selection then got underway and quickly seated the first juror.

Juror No. 2, who’s described as a white man in his 50s who works as an editor in the field of neurology, noted he believes "blue lives matter" is somewhat unfavorable because it was simply created as a counter-cry to Black Lives Matter. However, he said he’s against defunding police and supports the good work police officers do. It will be the first jury he’s served on.

After the morning break, Wright’s father, mother and brother arrive and sit in the back of the courtroom. 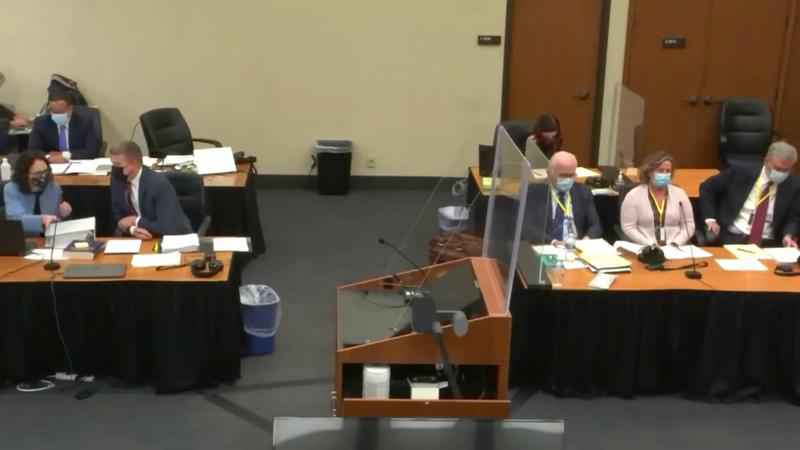 State prosecutors (left) and Kim Potter along with her attorneys (right) await the start of jury selection on Tuesday, Nov. 30, 2021.[Court TV]

The fourth potential juror of the day, Juror No. 6, a white woman in her 60s who is a retired teacher, was then questioned and seated as the second juror for the case. Juror No. 6 said the anniversary of the death of one of her daughters is quickly approaching so she may be emotional during the trial. She added that her first reaction to Wright’s death was, "How could this happen?"

The last potential juror questioned before a lunch break was Juror No. 7 — a 29-year-old white man who is an overnight manager at Target and is in a rock band. Juror No. 7 said he went through a firearm safety class when he was 14 and owned a stun gun when he toured with his band about five years ago. However, he no longer has it. He also said he has some family members in law enforcement but they’re not very close. Overall, he said he was slightly distrustful of police but grateful for the good work they do. He became the third juror seated in the case.

The morning period went slower than Chu had hoped, as she said the goal was to get through seven potential jurors in the morning and another seven in the afternoon. After lunch, things didn’t speed up at all.

A retired fire captain was questioned at length by the state over his ties to police and whether he’d be biased. Eventually, the state decided to strike him. It was the first of up to three potential jurors the state can strike.

The seventh and final juror in the first panel of potential jurors said he’d struggled to set his biases aside and outright said he was biased against Potter. The state tried to argue the potential juror noted he could set his biases aside and not make a decision based solely on what he knows now, but the defense requested the juror be dismissed for cause and Chu granted the request.

After a new panel of seven jurors was sworn in and jury selection continued, the next potential juror described his wife’s recent health struggles and also said he feared for his safety. Chu and the defense worked with him to see if he’d serve if picked but the man was ultimately dismissed for cause over his concerns.

By the time afternoon break wrapped up and the process resumed, it was 3:45 p.m. and still only three jurors had been seated.

That’s when Juror No. 11 came in for questioning. The Asian woman in her 40s said someone she knew died in a stabbing about five years ago. She also has a brother who was in the Marines and lived near what she called the "scary" demonstrations in Minneapolis over the past year. She was carefully questioned by the state about being impartial but was eventually seated as the fourth juror in the case.

Two more potential jurors were questioned before court was adjourned for the day but both were dismissed. One was a college student who would’ve had to miss finals. The other was a woman in her 30s who was questioned heavily by the defense and noted she supports defunding the police, participated in a protest after George Floyd died, called Potter’s actions careless and unfortunate and said the judicial system is deeply flawed. The defense used its first of up to five peremptory challenges to have her dismissed.

In total, the state still has two peremptory challenges left while the defense has four.

Jury selection will continue Wednesday morning at 9 a.m. Ten more jurors — two of which will be alternates — are still needed for the trial, which is set to move to opening statements on Dec. 8.