After a slow start to the third day of jury selection for the trial of former Brooklyn Center police officer Kim Potter, three more jurors were seated on Thursday.

The process got started late after Judge Regina Chu and attorneys for both sides met behind closed doors and then a new panel of jurors had to be sworn in.

Individual questioning finally got started around 10 a.m. but the process wasn’t as successful as the previous two days.

Potential juror No. 33, a white man who’s a teacher, was the first to be questioned individually. He said he has strong feelings in the case as his students remind him of Daunte Wright and it’d be hard for him to set those sympathies and biases aside. Assistant Attorney General Matthew Frank pointed out the juror had written on his questionnaire that he could be impartial but the juror says he doesn’t know if that’s the case anymore. After a pair of sidebars, Chu excused the juror for cause.

Next up was a white woman who said she’d participated in protests in the past year and held signs saying Black Lives Matter and justice for Wright and Breonna Taylor. However, that wasn’t an issue, as she said she could be impartial. Instead, a family trip starting Dec. 20 that was planned and paid for became the issue. After saying it couldn’t be rescheduled and she wouldn’t be able to attend if she was a juror and the process lasted beyond Dec. 20, plus a couple more sidebars with Chu and the attorneys, Chu excused her for cause over an objection from the state. 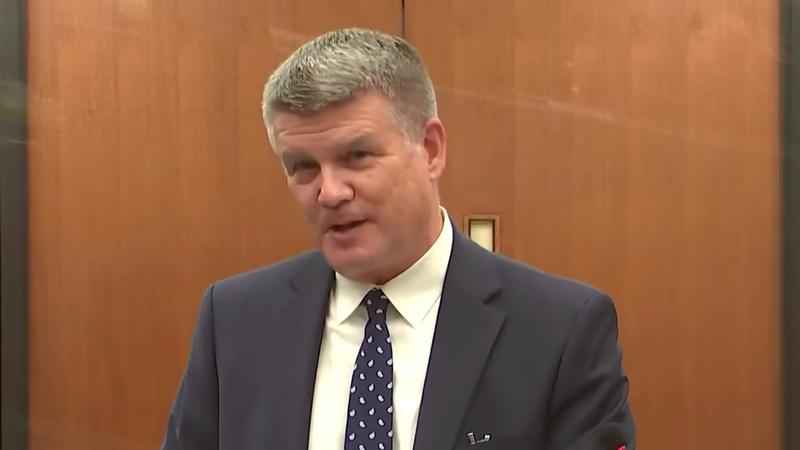 In this screen grab from video, Assistant Minnesota Attorney General Matthew Frank questions a potential juror as Hennepin County Judge Regina Chu presides over jury selection Thursday, Dec. 2, 2021, in the trial of former Brooklyn Center police Officer Kim Potter at the Hennepin County Courthouse in Minneapolis, Minn. Potter is charged with first- and second-degree manslaughter in the April 11 shooting of Wright, a 20-year-old Black motorist, following a traffic stop in the Minneapolis suburb of Brooklyn Center.[CourtTV]

After starting 0-2 on the day, a Black man who immigrated to America about 10 years ago and spoke English as a second language was called in. While the man was able to understand almost every question, Chu and the attorneys struggled to get straight answers out of him. He was questioned for over 50 minutes — almost entirely about his ability to understand, should he be chosen — before Chu asked the juror if he’s confident he’d understand everything in the trial, and he replied that he’s not confident. Chu then excused him for cause.

Frank noted the state’s objection to the juror being dismissed both before and after Chu’s decision, citing the man’s multiple degrees he obtained at the University of Minnesota and the fact that the juror plainly stated he could understand English but had more trouble clearly speaking it. Frank also noted most jurors don’t understand the complex legal points of trials but the court provides written and verbal definitions, which the man had said he would be fine with. The state was likely also upset the defense didn’t even have to use one of its three remaining peremptory challenges to dismiss the juror, of which the state had zero left.

Regardless of the state’s feelings, the juror was dismissed and none of the three potential jurors questioned before morning break were seated.

Only one juror was questioned between the morning and lunch breaks but the process yielded the 10th seated juror.

Juror No. 40, a white man in his 40s who works as an IT information security consultant, noted he had some concerns about what information about him would be released after the trial and how it could affect the safety of him and his family. He also said he was arrested in the past but "got what I deserved" and it wouldn’t affect his ability to be impartial as a juror. However, defense attorney Paul Engh went through Juror No. 40’s entire questionnaire, asking about his responses and whether he could be a fair juror. Every time, the man maintained he’d be fair, and, after about 20 minutes of questioning by Engh, the state approved him without asking a single question and the man became the 10th juror seated in the case.

When court reconvened at 1:30 p.m., after lunch, Juror No. 7 — who was seated Tuesday but was identified by defense attorney Earl Gray by name and asked identifying questions — was questioned briefly. He expressed concerns about his privacy after people he knew reached out to him following his initial questioning. However, he still wanted to serve on the jury and was allowed to remain a juror.

Then, questioning new potential jurors resumed at 2:10 p.m. with the questioning of a young Asian woman. She was a first-year law student who the defense questioned about her opinions supporting police and criminal justice reform. She noted she has looked at it and talked about it in broad terms but could be impartial. However, the defense says her social media comments seem anti-police. She disagrees, saying she’s only commented on specific cases, not police in general but the defense uses its third of five peremptory strikes and she’s excused.

The state later argued the defense used a strike on her simply because of her race or gender but Chu said she had no indication that’s true.

Juror No. 48, a white woman in her 40s, then was questioned. She worked previously as an IT project manager and said she’s both willing to serve and would be fair. She said all of her previous interactions with police left her satisfied, as everyone did what they were supposed to and wouldn’t impact her as a juror. After brief questioning from Gray and Frank, she’s seated as the 11th juror for the case, leaving three spots left to fill.

After the afternoon break, a woman whose brother-in-law is in the Minnesota National Guard and served during the Derek Chauvin trial was questioned. She was questioned by Chu for about 20 minutes — one of the longer periods Chu has taken to question a juror. She expressed some concerns about her information becoming public after the trial but said she’d still serve if chosen, and she’d be impartial. However, the defense decided to use its fourth of five peremptory strikes to dismiss her.

The next juror, a woman who detailed her family and friends being involved in past incidents with the police and didn’t have good experiences was quickly excused for cause before Chu even finished questioning her.

The final juror to be questioned was No. 55, a white man in his 50s who is a field systems engineer for a cybersecurity company. He said his wife was the victim of an attempted carjacking in south Minneapolis last year and was pistol-whipped but the culprits have not been found. He said the suspects were young Hispanic or Black men but he would set that aside during the trial. He served in the Navy and volunteered to be shocked by a stun gun during training about 30 years ago. He expressed his support for some police reforms and said he didn’t agree with "blue lives matter" because "you can choose your vocation, but you can’t choose your skin color." He was seated as the 12th juror for the case.

Wright’s family was in attendance for Thursday’s proceedings the entire day.

Click here to read more about Thursday’s jury selection or watch the proceedings.