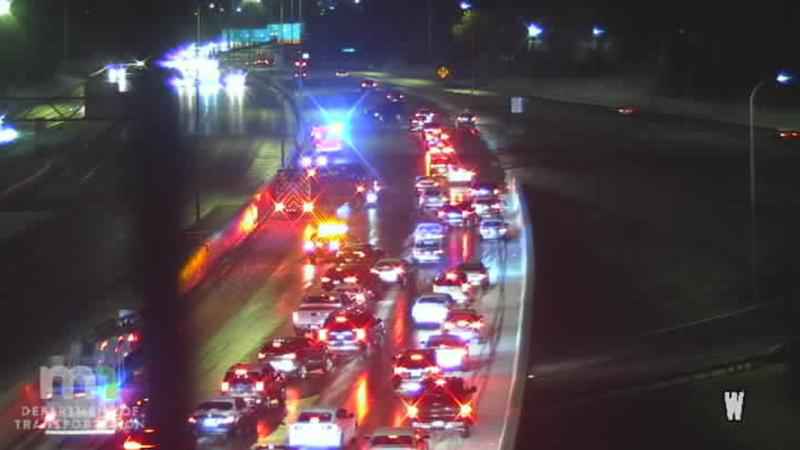 According to the State Patrol, between noon and 9:30 p.m., there were 166 crashes statewide — 15 had injuries. Seventy-nine vehicles spun out and five semi-trucks jackknifed. There were no serious injuries or fatalities.

The Move Over Law, named for State Patrol Trooper Ted Foss who was killed on a shoulder in Winona in 2000, requires drivers to move over a full lane from stopped emergency vehicles with flashing lights on roads with two or more lanes. If you’re unable to move over, reduce your speed.

In total, there have been 221 crashes in less than 16 hours Saturday.

A winter weather advisory remains in effect for multiple counties in and around the metro through 6 a.m. Sunday.

Minnesota traffic management cameras showed emergency vehicles on the highway shortly after 8 p.m. near Ethan Street. The road is closed on the westbound side and traffic is being diverted.

It is unknown how many vehicles are involved or if there are any injuries at this time.

On eastbound Highway 36 near White Bear Avenue, a semi-cab rolled over around 8:30 p.m. in Maplewood.

Also around 8:30 p.m., a crash caused delays on Interstate 694 eastbound near Main Street near Fridley.

This is a developing situation. Stay with kstp.com for updates.

In greater Minnesota, troopers responded to a number of crashes and jackknifed semis as snow fell throughout the day.