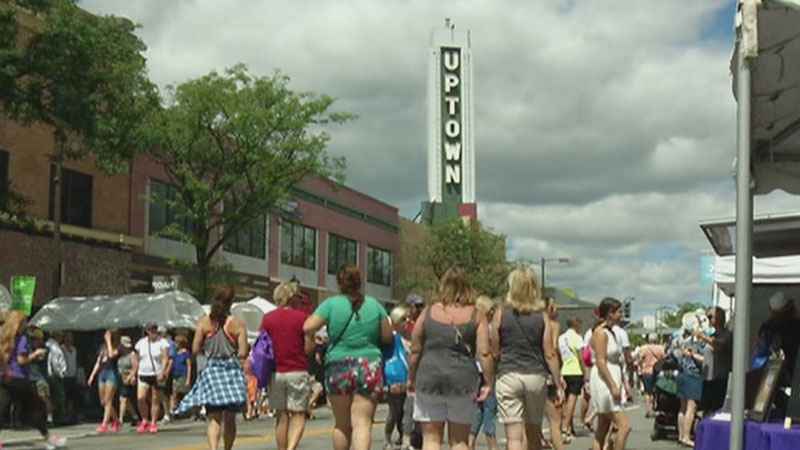 The 2021 Uptown Art Fair has been canceled, organizers announced Tuesday.

In a statement, the Uptown Association said "several unanticipated challenges and events that are beyond our control" were to blame for the cancellation of the event, which was planned for Aug. 6-8. It would have been the art fair’s 57th year.

Event organizers said they had considered several options, including relocating to an alternate location a few blocks away from the festival’s usual home at Hennepin and Lagoon avenues, but ultimately decided it would be best to call it off.

"However, despite our collective best effort, we were unable to reach a consensus among the many stakeholders it takes to successfully put on an event of this size and scope," the Uptown Association said in a statement. "Because of multiple evolving issues and the logistics of a large-scale event, it was not executable."

Last month, protests and unrest repeatedly disrupted the Uptown area after members of a U.S. Marshals-led task force shot and killed Winston Smith while attempting to serve an arrest warrant on June 3 in a parking garage at Lake Street and Girard Avenue.

Investigators with the Minnesota Bureau of Criminal Apprehension say a gun and spent shell casings were recovered inside Smith’s vehicle, but the woman who was in the car with him claims he never produced a weapon during the encounter.

At the time, the North Star Fugitive Task Force didn’t allow member law enforcement officers to wear body cameras or use dashcams. Since then, the U.S. Marshals Service said it planned to reverse that policy.

The BCA said investigators have yet to find any video recording of the shooting, and protesters have since made "Stop the cover-up" their rallying cry.

The Uptown Association didn’t say whether its decision to cancel the Uptown Art Fair was directly linked to the unrest last month, which included damage to property and businesses. Deona Knajdek, a woman who was in her car blocking off Lake Street for protesters, was killed June 13 after a drunken driver smashed into her. The driver, Nicholas Kraus, is charged with second-degree intentional murder in Knajdek’s death.

"The Uptown Association is committed to the promotion of Uptown as a place to play, eat, work, and live, and to celebrating its unique spirit and sense of community," the organization said in a statement. "We recognize and are saddened by recent events that have had a painful impact on Minneapolis and the Uptown community and are steadfast in helping our diverse community thrive."

Organizers are tentatively setting the festival’s return for Aug. 5-7, 2022.