Two people are dead after a police chase and crash in northeast Minneapolis.

Thursday, police told 5 EYEWITNESS NEWS there were five people in the vehicle that crashed.

Police didn’t provide the ages of those in the vehicle, but did say they were all juveniles, and that two of them had died.

Robbinsdale police reported they were previously informed of an armed carjacking that had taken place in the area of 12th and Fremont avenues in Minneapolis at about 6 p.m. Wednesday. 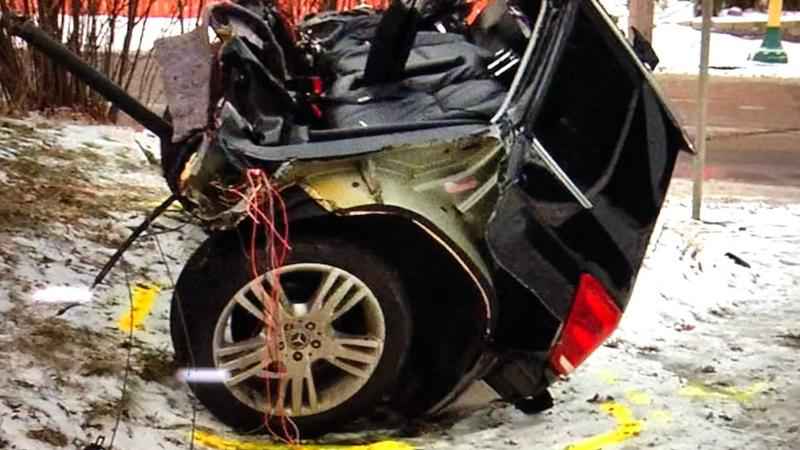 KSTP's Eric Chaloux reports this is half of a Mercedes SUV that was reportedly taken in a Minneapolis carjacking and that ultimately crashed.[KSTP/ Eric Chaloux]

Police said they spotted a vehicle that matched the description of the carjacked vehicle around 2 a.m. Thursday in the area of County Road 81 and Abbott Avenue.

Officers tried to pull the car over and then pursued it into northeast Minneapolis. That’s where police said the vehicle crashed, near Northeast Lowry Avenue and Hayes Street.

The crash split the vehicle in half. Robbinsdale police said one of the juveniles was pronounced dead at the scene and a second juvenile died after being transported to a nearby hospital.

Police said the other three juveniles who were in the vehicle were injured and were being treated "for substantial, non-life-threatening injuries."

The Minneapolis carjacking victim told 5 EYEWITNESS NEWS that she hasn’t been able to sleep since the incident. She recalled throwing over her keys to four juveniles who pulled up to her and commanded she turn them over. She wasn’t hurt during the encounter.

The identities of those inside the SUV have not been released.

Robbinsdale Police said their investigators were at a Minneapolis hospital where the 3 injured teens were being treated trying to learn more about what played out.

The police talked about the difficulty of stopping carjackings, which are on the rise across the area.

"Carjackings have been on the rise; I think everyone knows that we try to stop people; this one happened in Minneapolis; it’s an unfortunate incident," Capt. John Kaczmarek, with the Robbinsdale Police Department, said.

The Robbinsdale and Minneapolis police departments, as well as the Minnesota State Patrol and Hennepin County Sheriff’s Office are continuing to investigate.