UPDATE: One person is dead and two others were taken to a hospital after an apparent home explosion in Princeton.

According to the Princeton police and fire departments, a caller reported a house explosion near North 11th Street and Eighth Avenue North at about 12:11 p.m.

First responders found a collapsed house that was fully involved with flames.

The departments said two injured adults who were found outside the home — a 39-year-old woman and a 59-year-old man — reported that a third person was still inside the home. They were taken to a hospital with unknown injuries. 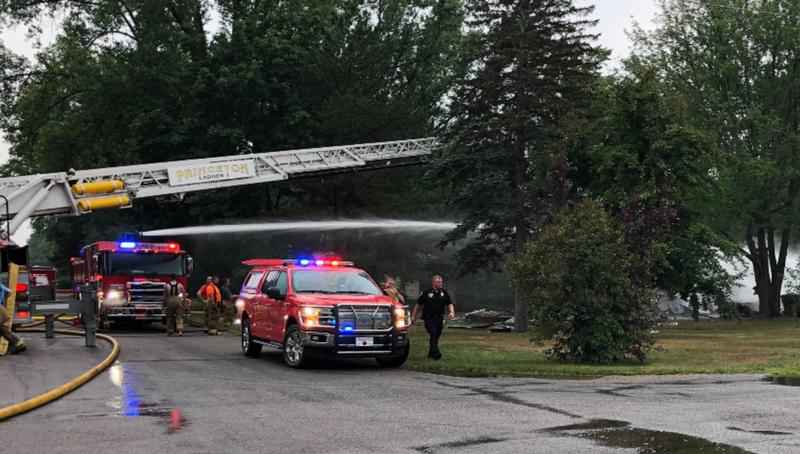 The scene of a possible house explosion in Princeton on July 22, 2021.[KSTP]

"We heard an explosion. We live behind the house it knocked things off the walls, we saw a mushroom cloud go up into the air," said Andrew Matthews, who helped pull victims out of the house.

"I was washing dishes and there was this huge boom. It was so big and it shook the whole house, the foundation, the floor — everything," said Joshua Lamb, who also helped pull victims out of the house.

"I ran over there quick to see what was going on," Matthews said. "There was a lady yelling. You couldn’t see anything of the house. There was just a door structure that led into the basement."

"There was one gal and I got her toward the street," Lamb added. "Then someone said, ‘my boyfriend needs help.’ Another guy was in the basement so I ran down and helped him out."

Firefighters were able to quickly contain the fire and then found the third victim dead inside the home, authorities said.

Family members told KSTP Reporter Callan Gray that Eugene Meyer, the homeowner, was the man who died in the explosion.

His son described Meyer as "always caring, if you needed help or anything my dad would be right there."

"My brother called me right away and said, ‘You better get down to Princeton, the house exploded,’" said Dennis Marquardt. "I got down here and I saw the house and I couldn’t believe that much damage was done […] I was shocked."

"Just say prayers for them," Betsy, Marquardt’s wife, said. "They’ve had a lot of loss and for this to happen again, just know that his mom and dad are together now."

She described her in-laws as accepting and loving people who welcomed anyone into their home.

"I guess the thing we need to be grateful for is if it had been later in the day, there could’ve been many, many more people inside the house because this house is always full of family and gatherings," Betsy Marquardt said.

They told 5 EYEWITNESS NEWS the other two people pulled from the home were family members as well, Leah and John Meyer.

"I can’t express gratitude for pulling [them out] and assisting," she said.

Investigators are still on the scene in Princeton.

Family members tell us homeowner Eugene Meyer died in the explosion. His son described him as “always caring, if you needed help or anything my dad would be right there.” pic.twitter.com/PkO2QWDURj

The video above is pool chopper hovering over the area where the explosion occurred.

KSTP is at the scene where a house explosion and fire occurred in Princeton Thursday afternoon.

First responders are also at the scene.

The Princeton Police Department has confirmed one person has died in the incident. However, they are unable to locate that person at this time.

It is unclear if there were any other victims, or other injuries sustained in this incident.

This is a breaking news story. KSTP is working to confirm more details and will update this story with more information.