Mike Murphy is the mayor of the small Anoka County city of Lexington that is closing in on a population of 5,000, double the size in 2010. The mayor now has ambitions of governing more than five million Minnesotans as governor.

He’s not as well-known as many of his Republican opponents who’ve held higher-profile political offices, but he’s more than willing to stake out bold positions. While many of his opponents favor income tax cuts instead of rebate payments as Governor Tim Walz proposes, Murphy says the state can afford to do both.

“We have to make sure this money is going back to those who actually paid in and not to everybody,” Murphy says of the rebate payments. He also says instead of $1,000 per family they should be $4,000 or more.

As a former law enforcement officer in Anoka County, he also supports more cops on the street as part of a public safety plan.

“We’re going to have to look at Minneapolis and St. Paul right away because that’s where a lot of these crimes are being committed across the metro and it’s spreading out into the suburbs and we’re going to have to increase law enforcement funding to get more police officers to come back onto the force,” he says. 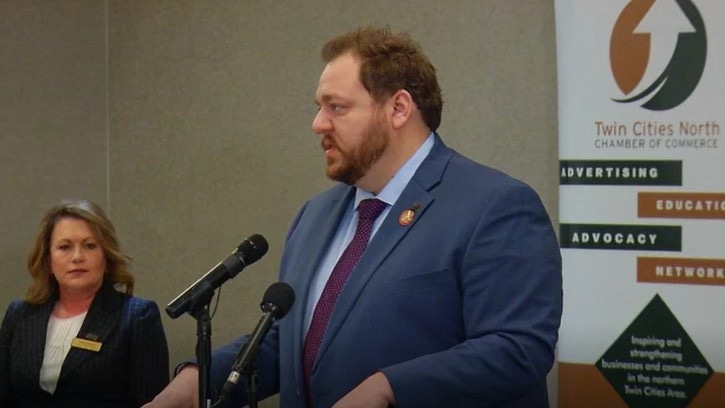 Murphy had to leave law enforcement after a back injury.

As mayor, Murphy says he’s also familiar with the use of emergency powers. He’s been an outspoken critic of Governor Walz for the way he used his powers.

“The whole point of emergency powers, and as a mayor you’re privileged to having those same powers under the constitution, and I give those powers back to my council after three days as per state statute and that’s what needs to be done at the state level.”

Murphy says Walz held on to his powers far too long and says using them to govern five million people is “pretty scary stuff.”

You can see the entire interview with Murphy Sunday morning on “At Issue with Tom Hauser” at 10 a.m.