Crossing Lake Superior for a cause, paddleboarder takes on ‘Great Lakes Challenge’

On Tuesday, paddleboarder Mike Shoreman will attempt to cross Lake Superior as the first athlete with disabilities to make the trip.

The Toronto-based man tells 5 EYEWITNESS NEWS he plans to paddle about 32 miles from Port Wing, Wisconsin all the way to Two Harbors, Minnesota. Shoreman estimates the trip will take around 12 hours from start to finish.

But this is just the third leg of the paddle-boarders five-step journey to crossing all of the Great Lakes. So far, this summer, Shoreman has already crossed both Lake Huron and Erie.

“Crossing Lake Huron for 28 hours, I was zoning out in the evening, I had to paddle through the dark.” Shoreman explained how tiring his first two treks across the might Great Lakes have been. “This one I will be paddling into the sunset, which is nice, but no you definitely fade after the fifth or sixth hour. I’m going about 2 miles an hour when I’m out there,” Shoreman added thinking about what Lake Superior will be like come Tuesday.

While his efforts have caught both local and national attention, Shoreman says he’s not doing this to make headlines. Instead, he’s aiming to become the first person with a disability to cross all Great Lakes in one summer in order to challenge stereotypes surrounding those who have disabilities and inspire youth struggling with their mental health. 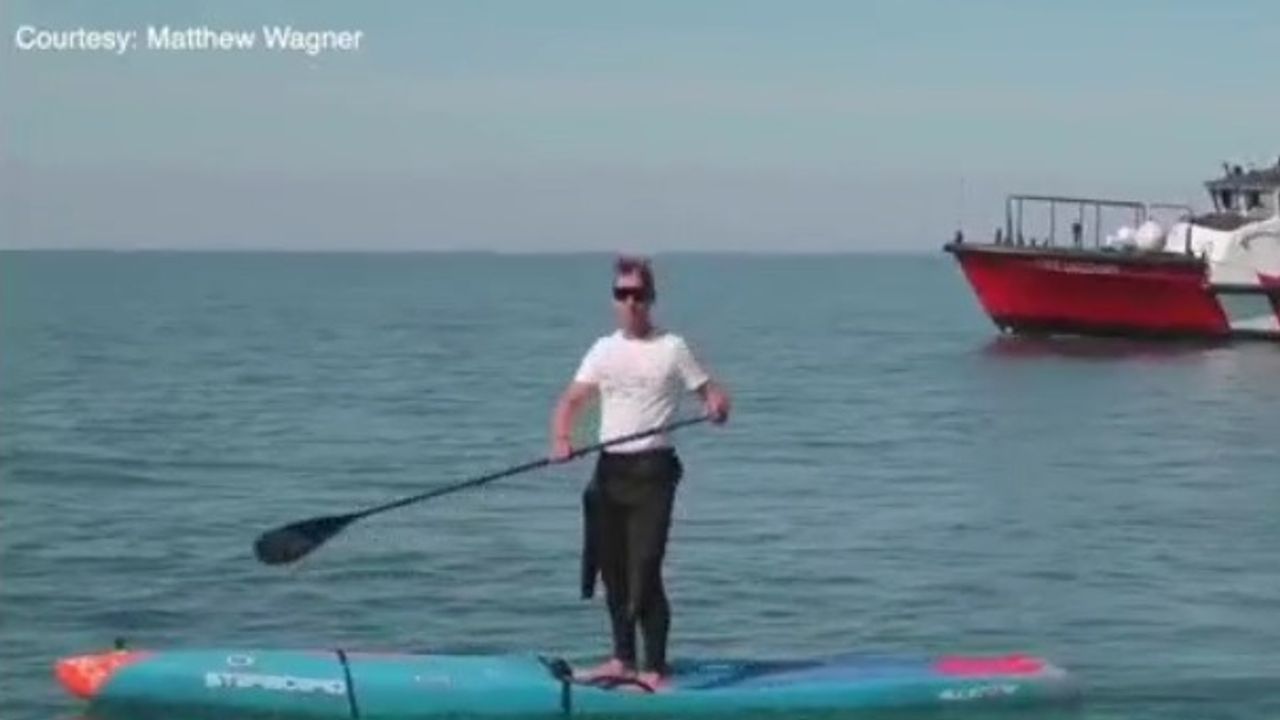 In 2018 Shoreman was among the best in paddle-boarding in Canada, with a thriving business coaching locals and tourists on the beautiful Toronto waterfront. Suddenly, his life dramatically changed when Ramsay Hunt Syndrome attacked his body, livelihood, and mind. The neurological condition, recently made more familiar by Justin Bieber who announced he’s suffering from the shingles variant, took over Shoreman’s life. It paralyzed half of his face and stole his ability to taste, smell, hear, talk and move. Since the illness and after going down a dark road of depression and then recovery, Shoreman has dubbed himself the Unbalanced Paddleboarder.

“I just realized I didn’t want kids to ever feel the way that I felt, alone and scared and worse.” So, Shoreman says he took action.

Deciding paddleboarding wasn’t over for him, the Unbalanced Paddleboarder wanted other people to know their dreams shouldn’t come to an end either.

Shoreman came back into the Canadian paddleboarding world with new meaning, earning the 2020-2021 International Stand Up Paddleboarding Man of the Year. From there he’s become an avid mental health advocate, raising thousands of dollars for organizations like:

Shoreman also encourages those in America to give to NAMI, the National Alliance on Mental Health, which is based in the U.S.

In 2021, his first attempt to cross Lake Ontario from the U.S. into Canada failed, but Shoreman didn’t let it stop him from spreading his message and getting back on his board.

The determined paddleboarder says he hopes by challenging himself to cross all five Great Lakes will send both kids and adults a message to never give up no matter what they are facing in life.

“I hope it reminds them people care and people are supporting them,” Shoreman said.

The Unbalanced Paddleboarder plans to cross Lake Michigan between July 10th and the 17th, then will take a second attempt at Lake Ontario the week of August 10th.

Click here to keep up with Mike Shoreman’s trek across the Great Lakes.