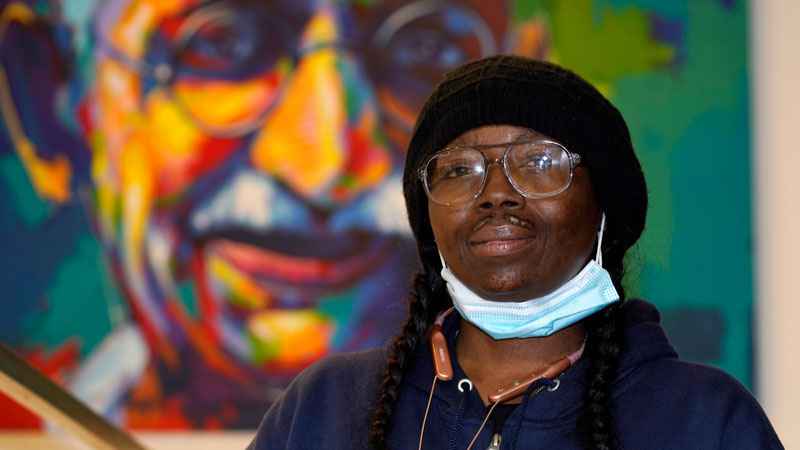 Sheneen McClain, the mother of Elijah McClain, a young man who died after a stop by police in Aurora, Colo., and has spurred investigations of police practices while galvanizing calls for police reforms, is shown in the office of her attorney, Qusair Mohamedbhai, Wednesday, March 3, 2021, in Denver. [AP Photo/David Zalubowski]

Sheneen McClain is not always hopeful but thinks it’s possible the death of her son Elijah McClain could create change.

Officers in suburban Denver stopped the 23-year-old Black massage therapist in 2019 as he walked home from the store after getting a 911 call that he looked suspicious. They put him in a neckhold, pinned him down and asked paramedics to sedate him with ketamine.

An investigation commissioned by the city of Aurora after McClain’s death got renewed attention during the nationwide push for racial justice said last week that there was no apparent legal justification for police to stop or use force on him.

Sheneen McClain said she knew her son was innocent but is glad the world knows it, too. When people die at the hands of police, the first question many ask is what the person was doing wrong and then write it off when they find out, she told The Associated Press in an interview Wednesday.

Cops fired over photos tied to Elijah McClain not reinstated

Since her son’s story spread around the world amid the reckoning over police brutality and racial injustice, people have been drawn to stories about Elijah McClain, including how he played his violin to comfort cats at an animal shelter and what he said to the officers who stopped him.

Captured on police body camera footage, he tells officers that he’s an introvert and "different" several times. Later, while officers talk to each other about what happened, McClain says he doesn’t believe in guns, doesn’t kill flies or eat meat and that "you are all phenomenal, you are beautiful." They didn’t respond.

Some have wondered what he meant when he said he was different. Sheneen McClain said she thinks he was trying to tell police that he was not a "statistic Black individual" but someone who was living a good life and not harming anyone. She thinks what Elijah said to the officers was a way to try to reach out to their humanity and for her son to remember who he was because she believes he knew he was dying.

Sheneen McClain, a single mother of six children who moved from Denver to Aurora to get away from gang violence, said Elijah was quiet and introverted as a child and she homeschooled him after he was bullied in school. He was intelligent and creative, learning to draw and play musical instruments on his own, but college was not an option because it was too expensive, she said.

Elijah was working at a pizza chain when he decided to go to massage therapy school as a way to get a better job fairly quickly. He immersed himself in learning, then became very health conscious and began running, his mother said. That’s when he started to wear the mask that raised the suspicion of a 911 caller who drew the police response.

Like Sheneen McClain and many others in her family, she said her son had anemia, so he often felt cold and wore layers of clothes and a mask — like the gaiters some have worn as face coverings during the coronavirus pandemic — even when he wasn’t running.

She wants the officers who stopped her son to be charged, convicted and spend the rest of their lives behind bars. One of them, Jason Rosenblatt, was fired last year, but not for stopping Elijah McClain. He responded "ha ha" to a photo taken by other former officers reenacting a neckhold at a memorial to McClain.

Former District Attorney Dave Young declined to file criminal charges against the officers in 2019, mainly because an autopsy could not determine how McClain died. The city investigation faulted his analysis of the case and said police investigators failed to press for the truth about how officers treated McClain.

Colorado Attorney General Phil Weiser has been investigating whether any criminal charges are warranted since last summer.

Sheneen McClain said people who have been killed because they were good like Martin Luther King Jr. and Mahatma Gandhi have changed the world after their deaths and she thinks the same could be true with her son.

"If anyone can change the world, it’s Elijah, because he has the empathy," she said.

"It’s like the people who killed them didn’t stop the message. It made the message last forever," she added.