Minnesota nurse returns home after caring for Ukrainian refugees in Poland, says “It is an all-out war”

“It was a twenty-four-hour operation,” Alexandra Sakurets recalls. “The lights never went off, the people never stopped coming.”

Sakurets — a nurse from Maple Grove — is back home, after a three-week stint as a volunteer in a shopping mall that was transformed into a refugee center inside Poland, just a few miles from the Ukrainian border.

On her social media posts, the mother of four shared images of the center that provided shelter, food and medicine for about 5,000 people.

Sakurets says there were limited restrooms and no showers.

“They were given a bracelet, just like this one, that they checked, and were allowed to stay on the premises of the refugee center,” she says. 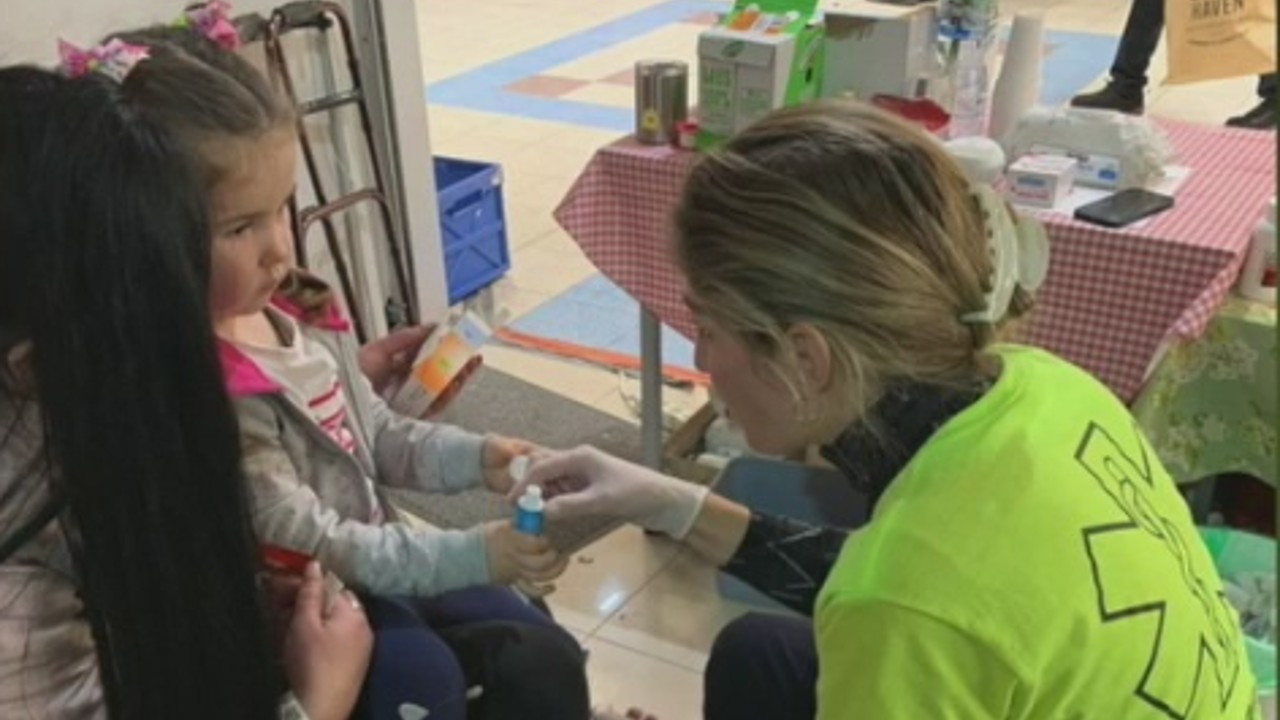 A member of the nonprofit Global Disaster Relief Team cares for a child at a center for Ukrainian refugees in Poland (Photo courtesy of Alexandra Sakurets).

She was one of five healthcare volunteers working with the “Global Disaster Relief Team” — a nonprofit started by a group of Russian-speaking medics working from the U.S.

The team opened up a dispensary, and soon was treating 300 to 400 patients a day.

“Some things we could take care of, we did. We had antibiotics, we had a physician on staff,” Sakurets says.

“There were people with shrapnel wounds,” she adds. “There was a woman who had pretty major head trauma, and ‘I asked what happened to you?’ And she said ‘a bomb went off, and I fell, and from the explosion, all of my teeth got knocked out on this side.’”

But there were other, less severe cases, Sakurets notes.

A lot of children had bronchitis — after some of them spent weeks in root cellars or underground shelters.

Sakurets also recalls a woman who came for treatment — too afraid to leave home to renew her insulin supply because of bombing raids.

“She brought me two of her pens that had nearly all run out,” she says. “To think that somebody would be dying because they can’t get insulin, and what she had also said, the pharmacies got bombed, the hospital got bombed — so there was really no chance of her getting insulin even if she did come out, and chose to stay.”

In that case, there was a happy ending — Sakurets notes.

The day the woman came to the dispensary, a shipment of humanitarian aid — including a fresh supply of insulin, had just arrived.

For Sakurets, this work was personal.

Now — a mother of four — she and her family left Ukraine and moved to Minnesota in 1989, when she was twelve years old.

After the Russian invasion in February, followed by the growing refugee crisis, Sakurets says she felt compelled to do something.

Authorities say more than four million Ukrainians have fled the country — and more than half of them are going to Poland.

“I couldn’t watch the news and stay inactive, because I possessed all the qualifications,” Sakurets explains. “I speak their language and I’m medically trained. It is an all-out war on Ukrainian citizens, women and children, living peacefully in villages.”

Weeks later, she’s back home, happy to rejoin her family in Minnesota — but dealing with mixed emotions.

“It felt like I was abandoning my people when I left,” she says. “And I had to tell myself that this is a race that’s not just my race. It’s a race against time. It’s a race for peace.”

We asked if Sakurets if she thought she made a difference.

But would she go back?

“I hope I don’t have to. I hope the war is over soon, and we can go back to living our lives. Ukraine will need to be rebuilt. It will need to be defended,” Sakurets declares. “lf there is ever a need, and there’s more, this continues, and they don’t have staff, I definitely would.”

You can find more information about the Global Disaster Relief Team here.