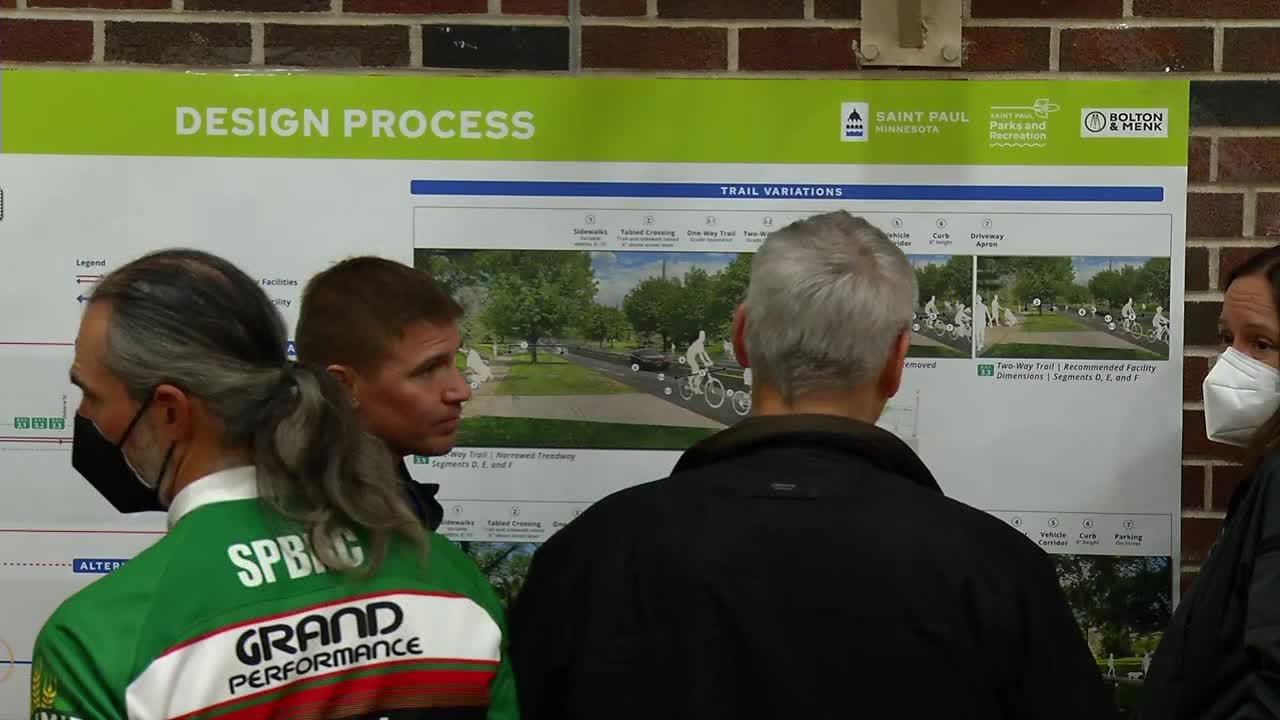 Community members look at mock-ups of Summit Avenue during an open house to unveil the draft master plan for a proposed regional trail spanning the historic parkway. (KSTP)

A yearslong process to rework Summit Avenue hit a major milestone Thursday night as St. Paul officials revealed what the historic parkway could look like in the future.

The city is mulling a redesign of the roadway to turn it into a “regional trail” that connects downtown St. Paul to the Mississippi River. Designs shown to the public so far have incorporated protected bike lanes and reduced parking along the avenue.

The plan would fold Summit Avenue into the city’s Grand Round system and link it with the Mississippi Gorge and Sam Morgan regional trails.

An open house Thursday evening at Hidden River Middle School let cyclists, preservationists and curious neighbors see a draft master plan for the first time. Over the next month, St. Paul will gather public comments on the proposal.

Mary Norton, a landscape architect for the city, said the documents unveiled on Thursday were a “60% plan.” Following a public comment period, the city will bring forward a 90% plan that will be refined into a final version.

Norton said she was pleased with the turnout Thursday and said the opinions so far have been “varied.”

Proponents say converting segments of Summit into separated lanes for bikes, pedestrians and cars will make the street more attractive as a recreation destination and safer for cyclists.

But detractors in the group Save Our Street are worried about conserving the tree-lined boulevard known for its multitude of Victorian mansions. Parts of the street are designated as local, state and national historic preservation areas.

“Our fears for Summit Avenue is that the history is going to be depleted, just like the trees are going to be destroyed. In 1905, a group of men signed a document to preserve trees, to create green space and to create an experience for the future, and we want to preserve that,” said Cynthia Rapacz, a Save Our Street representative who was tending to a table with pamphlets and buttons outside the meeting.

Prince said she was encouraged to see the draft master plan included one-way bike lanes on either side of the street rather than two-way paths that raise safety concerns. She was also cautiously optimistic about the extent to which the plan would preserve Summit’s famous tree canopy.

“It’s my hope that if they stay within the current curb lines of the avenue to put this all together that we won’t lose many trees,” she said.

A 30-day public comment period is set to open in November. Residents can submit their remarks online.

“People care very much about what happens here,” Norton said. “We want to hear all sides of that.”