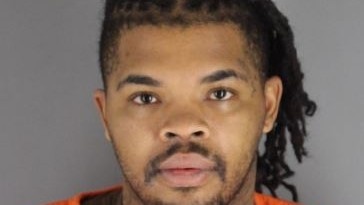 A man accused of shooting at a Golden Valley police officer following a pursuit has been criminally charged.

A criminal complaint states a Golden Valley police officer responded to a report of an attempted burglary at around 9:30 p.m. on Feb. 16. When the officer arrived, he saw a suspicious vehicle sitting near the 911 caller’s home and noticed a man matching the suspect’s description in the front seat of the car.

RELATED: 2 in custody after Golden Valley officers were fired at

The officer attempted to stop the vehicle but it sped away and a pursuit began. Eventually, the suspect’s car crashed into a snowbank, the complaint states.

After the crash, Collins and the officer each got out of their vehicles and Collins began firing shots at the officer while running away, the complaint states.

The officer wasn’t hit but the squad was struck. Officers found Collins hiding behind a bush a short time later.

The complaint states that investigators found Collins had broken into multiple homes in the area, including one where he hid his pistol — which was modified and capable of automatic fire — and magazine after the shooting. Authorities also learned that Collins had broken into a home before the shooting and stolen two small safes, which were found in the car he’d been in.

Another person was also arrested from the vehicle Collins was in but that person was released without any charges.

Collins is scheduled to make his first court appearance on Wednesday afternoon.