EXPLAINER: Noor ruling could have impacts for other ex-cops 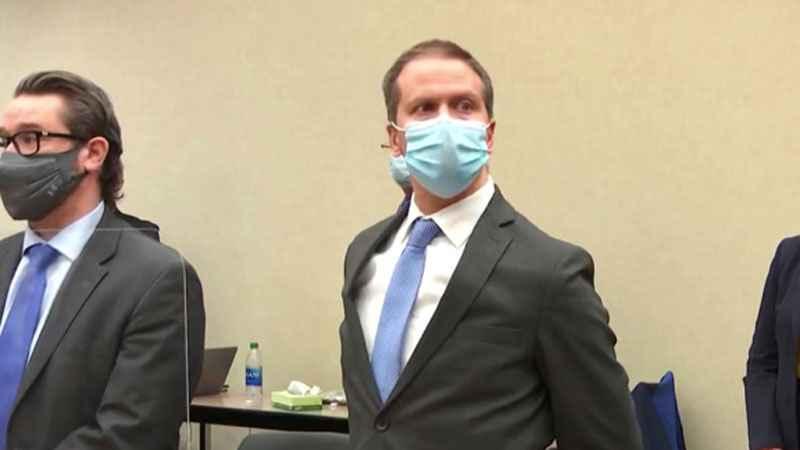 FILE - In this image from video, former Minneapolis police Officer Derek Chauvin, center, stands after the verdict is read in his trial for the 2020 death of George Floyd, Tuesday, April 20, 2021, at the Hennepin County Courthouse in Minneapolis, Minn. Standing next to him are attorneys Eric Nelson, left and Amy Voss.[Court TV via AP, Pool]

The Minnesota Supreme Court is deciding how to interpret the state’s third-degree murder statute in a police killing case that is expected to have repercussions for the four former Minneapolis police officers charged in the death of George Floyd.

The state’s highest court heard oral arguments Wednesday in the case of Mohamed Noor, a former Minneapolis police officer who fatally shot Justine Ruszczyk Damond. Damond, a dual U.S.-Australian citizen engaged to a Minneapolis man, had called 911 to report a possible sexual assault behind her home. Noor was convicted in 2019 of third-degree murder and second-degree manslaughter.

The main issue before the justices, who did not say when they would rule, is how to properly interpret Minnesota’s third-degree murder statute, which has been hotly debated in the prosecutions over both the Damond and Floyd killings. Here’s a look at some of the issues involved:

Minnesota law defines third-degree murder as “an act eminently dangerous to others and evincing a depraved mind, without regard for human life.” A central dispute is whether “dangerous to others” must be read as plural, or if the fatal act can be directed at a single, specific person.

Defense attorney Caitlinrose Fisher argued that the statutory language, backed by case law, requires that a defendant’s actions be directed at more than one person, and that the law is meant for cases such as indiscriminate killings.

But Hennepin County prosecutor Jean Burdorf cited other cases, including a February decision from the Minnesota Court of Appeals that affirmed Noor’s conviction. Those cases held that “others” could mean just one person. She asked the justices to make the law clear because the proper interpretation has become unclear amid conflicting rulings over the years.

HOW THE RULING COULD AFFECT THE EX-OFFICERS CHARGED IN FLOYD’S DEATH:

Derek Chauvin was convicted in April of second- and third-degree murder, plus second-degree manslaughter. The white former Minneapolis police officer pinned Floyd to the pavement for close to 9 1/2 minutes in May 2020 as the Black man said he couldn’t breathe and went motionless. Floyd’s death, captured on widely seen bystander video, sparked worldwide protests and a national reckoning on racial justice.

Hennepin County District Judge Peter Cahill will sentence Chauvin on June 25 on just the most serious charge. Prosecutors have asked for 30 years in prison; the defense has asked for probation and time already served. Cahill last fall threw out the third-degree murder charge, but reinstated it in light of the Court of Appeals’ ruling on Noor.

If the Supreme Court voids Noor’s conviction for the reasons debated Wednesday, Chauvin would have grounds for contesting his conviction on the third-degree murder count. But it wouldn’t affect Chauvin’s sentence unless he also succeeds in his own appeal of his second-degree murder conviction. A decision in favor of Noor would have had a bigger impact on Chauvin’s case if Chauvin had been acquitted on the most serious charge, but it stuck.

Adding the lesser count could increase the odds of prosecutors getting convictions, but the count also carries lower sentences. Under Minnesota law, aiding and abetting carries the same sentence as the underlying crime itself.

WHAT COULD HAPPEN TO NOOR IF HE WINS:

Noor isn’t contesting his conviction on the lesser charge of second-degree manslaughter. Fisher urged the justices to send the case back to the trial court for resentencing on that count alone.

While Noor was sentenced to 12 1/2 years on the murder count, which matched the prison term recommended by the state’s sentencing guidelines, those guidelines recommend just four years for the manslaughter count.