US struggles to speed Kabul airlift despite Taliban, chaos 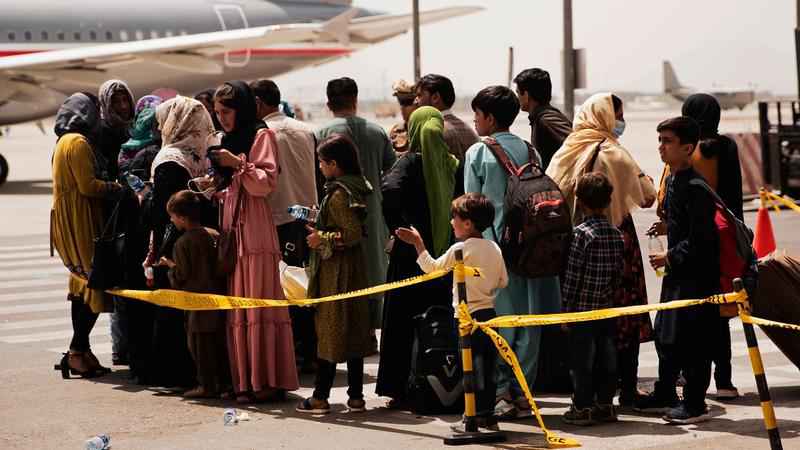 In this photo provided by the U.S. Marine Corps, civilians prepare to board a plane during an evacuation at Hamid Karzai International Airport, Kabul, Afghanistan, Wednesday, Aug. 18, 2021.[Staff Sgt. Victor Mancilla/U.S. Marine Corps via AP]

The United States is struggling to pick up the pace of American and Afghan evacuations at Kabul airport, constrained by obstacles ranging from armed Taliban checkpoints to paperwork problems. With an Aug. 31 deadline looming, tens of thousands remained to be airlifted from the chaotic country.

Taliban fighters and their checkpoints ringed the airport — major barriers for Afghans who fear that their past work with Westerners makes them prime targets for retribution. Hundreds of Afghans who lacked any papers or clearance for evacuation also congregated outside the airport, adding to the chaos that has prevented even some Afghans who do have papers and promises of flights from getting through.

It didn’t help that many of the Taliban fighters could not read the documents.

In a hopeful sign, State Department spokesman Ned Price said in Washington that 6,000 people were cleared for evacuation Thursday and were expected to board military flights in coming hours. That would mark a major increase from recent days. About 2,000 passengers were flown out on each of the past two days, Pentagon spokesman John Kirby said.

Kirby said the military has aircraft available to evacuate 5,000 to 9,000 people per day, but until Thursday far fewer designated evacuees had been able to reach, and then enter, the airport.

Kirby told reporters the limiting factor has been available evacuees, not aircraft. He said efforts were underway to speed processing, including adding State Department consular officers to verify paperwork of Americans and Afghans who managed to get to the airport. Additional entry gates had been opened, he said.

And yet, at the current rate it would be difficult for the U.S. to evacuate all of the Americans and Afghans who are qualified for and seeking evacuation by Aug. 31. President Joe Biden said Wednesday he would ensure no American was left behind, even if that meant staying beyond August, an arbitrary deadline that he set weeks before the Taliban climaxed a stunning military victory by taking Kabul last weekend. It was not clear if Biden might consider extending the deadline for evacuees who aren’t American citizens. The president will deliver remarks on the evacuation Friday afternoon at the White House.

At the Kabul airport, military evacuation flights continued, but access remained difficult for many. On Thursday, Taliban militants fired into the air to try to control the crowds gathered at the airport’s blast walls. Men, women and children fled. U.S. Navy fighter jets flew overhead, a standard military precaution but also a reminder to the Taliban that the U.S. has firepower to respond to a combat crisis.

There is no accurate figure of the number of people — Americans, Afghans or others — who are in need of evacuation as the process is almost entirely self-selecting. For example, the State Department says that when it ordered its nonessential embassy staff to leave Kabul in April after Biden’s withdrawal announcement, fewer than 4,000 Americans had registered for security updates. The actual number, including dual U.S.-Afghan citizens along with family members, is likely much higher, with estimates ranging from 11,000 to 15,000. Tens of thousands of Afghans may also be in need of escape.

Compounding the uncertainty, the U.S. government has no way to track how many registered Americans may have left Afghanistan already. Some may have returned to the United States but others may have gone to third countries.

At the Pentagon, Kirby declined to say whether Defense Secretary Lloyd Austin had recommended to Biden that he extend the Aug. 31 deadline. Given the Taliban’s takeover of the country, staying beyond that date would require at least the Taliban’s acquiescence, he said. He said he knew of no such talks yet between U.S. and Taliban commanders, who have been in regular touch for days to limit conflict at the airport as part of what the White House has termed a "safe passage" agreement worked out on Sunday.

"I think it is just a fundamental fact of the reality of where we are, that communications and a certain measure of agreement with the Taliban on what we’re trying to accomplish has to occur," Kirby said.

Of the approximately 2,000 people airlifted from the airport in the 24 hours ended Wednesday morning, nearly 300 were Americans, Kirby said. U.S. lawmakers were briefed Thursday morning that 6,741 people had been evacuated since Aug. 14, including 1,762 American citizens and Green Card holders, according to two congressional aides.

Although Afghanistan had been a hotspot for the coronavirus pandemic, the State Department said Thursday that evacuees are not required to get negative COVID-19 results.

"A blanket humanitarian waiver has been implemented for COVID-19 testing for all persons the U.S. government is relocating from Afghanistan," the department said. Medical exams, including COVID-19 tests, had been required for evacuees prior to the Taliban’s takeover of Kabul, which added extra urgency to efforts to get at-risk Afghans out.

Additional American troops continued to arrive at the airport. As of Thursday there were about 5,200, including Marines who specialize in evacuation coordination and an Air Force unit that specializes in emergency airport operations. Biden has authorized a total deployment of about 6,000.

Hoping to secure evacuation seats are American citizens and other foreigners, Afghan allies of the Western forces, and women, journalists, activists and others most at risk from the fundamentalist Taliban.

In June, more than 20 diplomats at the U.S. Embassy in Kabul registered their concerns that the evacuation of Afghans who had worked for America was not proceeding quickly enough.

In a cable sent through the State Department’s dissent channel, a time-honored method for foreign service officers to register opposition to administration policies, the diplomats said the situation on the ground was dire, that the Taliban would likely seize control of the capital within months of the Aug. 31 pullout, and urged the administration to immediately begin a concerted evacuation effort, according to officials familiar with the document.

Will U.S. troops go beyond the airport perimeter to collect and escort people? Austin suggested on Wednesday that this was not currently feasible. "We don’t have the capability to go out and collect large numbers of people," he told reporters.

Austin added that evacuations would continue "until the clock runs out or we run out of capability."

Afghans in danger because of their work with the U.S. military or U.S organizations, and Americans scrambling to get them out, also pleaded with Washington to cut the red tape that has complicated matters.

"If we don’t sort this out, we’ll literally be condemning people to death," said Marina Kielpinski LeGree, the American head of a nonprofit, Ascend. The organization’s young Afghan female colleagues were in the mass of people waiting for flights at the airport in the wake of days of mayhem, tear gas and gunshots.