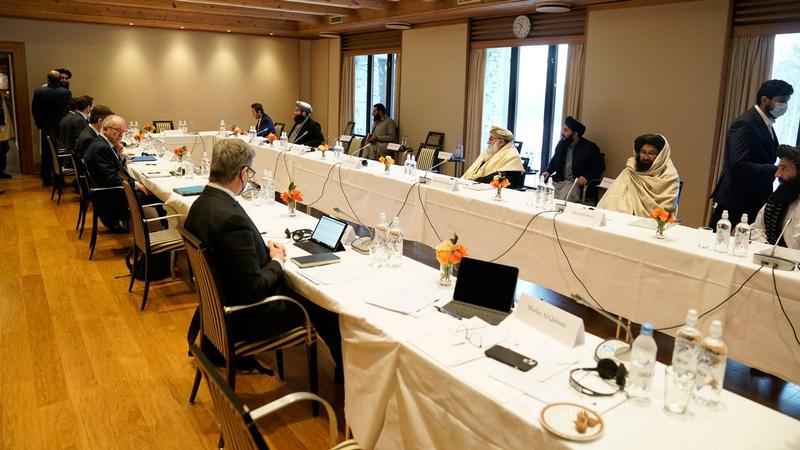 International special representatives and representatives from the Taliban are seated, ahead of a meeting, in Oslo, Norway, Monday, Jan. 24, 2022. Western diplomats are meeting with Afghan women’s rights activists and human rights defenders in Oslo ahead of the first official talks with the Taliban in Europe since the Taliban took over in August. The closed-door meeting was a chance to hear from civil society in Afghanistan and the Afghan diaspora their demands and assessment of the current situation on the ground. The meeting was taking place at a hotel in the snow-capped mountains above the Norwegian capital and was attended by representatives of the EU, the US, the United States, France, Italy and hosts Norway.[Stian Lysberg Solum / NTB via AP]

The Taliban and western diplomats have begun their first official talks in Europe since they took over control of Afghanistan in August.

The closed-door meetings were taking place at a hotel in the snow-capped mountains above the Norwegian capital. Taliban representatives will be certain to press their demand that nearly $10 billion frozen by the United States and other Western countries be released as Afghanistan faces a precarious humanitarian situation.

Ahead of the talks, western diplomats met with Afghan women’s rights activists and human rights defenders to hear from civil society in Afghanistan and the Afghan diaspora about their demands and assessment of the current situation on the ground. The meeting was attended by representatives of the EU, the U.S., Britain, France, Italy and hosts Norway.

Standing silent as attendees gathered, women’s rights activist Heda Khamoush, who lives in Kabul, held up the photos of Tamana Zaryabi Paryani and Parwana Ibrahimkhel, two women arrested by the Taliban last week following an anti-Taliban protest against the compulsory Islamic headscarf, or hijab, for women. They haven’t been seen since.

Rejecting the accusation the Taliban had abducted them, Azam said he was "not aware of that" and suggested activists may be using this event to seek asylum.

Speaking after the meeting, women’s rights activist Mahbouba Seraj angrily rejected this and warned that "if they continue this way —to tell us something and do something else — that’s when the trust is going to break, completely."

The three-day talks opened on Sunday with direct meetings between the Taliban and civil society representatives.

A joint statement tweeted overnight by Zabihullah Mujahid, the Afghan deputy culture and information minister, said "participants of the meeting recognized that understanding and joint cooperation are the only solutions to all the problems of Afghanistan," and emphasized that "all Afghans need to work together for better political, economic and security outcomes in the country."

Seraj acknowledged the progress made. "Yes, they were listening. I should say that," she said Monday morning. "We gave them a paper. We asked them what we wanted. They took it. They were very, very cordial about it."

The talks come at a crucial time for Afghanistan as freezing temperatures are compounding misery from the downward spiral that has come with the fall of the U.S.-backed government and the Taliban takeover.

Aid groups and international agencies estimate about 23 million people, more than half the country, face severe hunger and nearly 9 million are on the brink of starvation. People have resorted to selling possessions to buy food, burning furniture for warmth and even selling their children. The United Nations has managed to provide some liquidity and allowed the Taliban administration to pay for imports, including electricity.

Faced with the Taliban’s request for funds, Western powers are likely to put the rights of women and girls in Afghanistan high on their agenda, along with the West’s recurring demand for the Taliban administration to share power with Afghanistan’s minority ethnic and religious groups.

Since sweeping to power in mid-August, the Taliban have imposed widespread restrictions, many of them directed at women. Women have been banned from many jobs outside the health and education fields, their access to education has been restricted beyond sixth grade and they have been ordered to wear the hijab. The Taliban have, however, stopped short of imposing the burqa, which was compulsory when they previously ruled Afghanistan in the 1990s.

A U.S. delegation, led by Special Representative for Afghanistan Tom West, plans to discuss "the formation of a representative political system; responses to the urgent humanitarian and economic crises; security and counterterrorism concerns; and human rights, especially education for girls and women," according to a statement released by the U.S. State Department.

The Scandinavian country, home to the Nobel Peace Prize, is no stranger to diplomacy. It has been involved in peace efforts in a number of countries, including Mozambique, Afghanistan, Venezuela, Colombia, the Philippines, Israel and the Palestinian Territories, Syria, Myanmar, Somalia, Sri Lanka and South Sudan.