‘Not like every time:’ Beirut blast victims want the truth 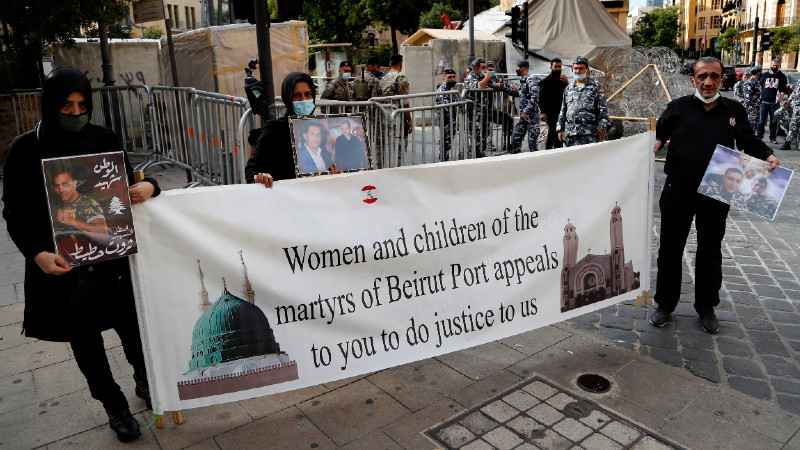 Relatives of victims of the Aug. 4 Beirut port explosion hold a banner and portraits of their loved ones who died in the explosion, during a sit-in near the Parliament building to demand an expedited investigation, in Beirut, Lebanon, Wednesday, Nov. 25, 2020. The blast was one of the largest non-nuclear explosions in history and six months later, political and confessional rivalries have undermined the probe into the Beirut port explosion and brought it to a virtual halt, mirroring the same rivalries that have thwarted past attempts to investigate political crimes throughout Lebanon's history. [AP Photo/Hussein Malla]

Days after a massive explosion ripped through Beirut’s port and disfigured the Lebanese capital, family members of some of the 211 people killed in the blast demanded an international probe.

It was a swift vote of no confidence in the authorities’ ability to investigate one of the largest non-nuclear explosions in history and one of the nation’s most traumatic experiences.

The skepticism was justified. Lebanon, a country wrought by political violence and assassinations, has a history of unfinished prosecutions and buried secrets.

Six months after the Aug. 4 blast, the domestic investigation has been brought to a virtual halt by the same political and confessional rivalries that thwarted past attempts to uncover the truth in major crimes.

What started as an investigation into how nearly 3,000 tons of ammonium nitrate, a highly explosive fertilizer component, were stored in Beirut port for years with politicians’ and security agencies’ knowledge has taken a turn, wading into a web of murky international business interests in the explosives trade and global shipping.

Huge fire breaks out at Beirut port month after explosion

Government officials rebuffed an international probe and appointed former military court judge Fadi Sawwan to investigate. He has largely focused on government incompetence amid public anger at a corrupt political class blamed for Lebanon’s slide into poverty and upheaval.

The prime minister refused to appear for questioning, calling it “diabolic” to single him out for charges. The ministers challenged the judge and asked Lebanon’s highest court to replace him in a move that brought the probe to a halt since Dec. 17. The interior minister said he won’t ask security forces to implement arrest warrants targeting political figures.

In early January, the Court of Cassation ruled that Sawwan can resume his investigation while it reviews calls to replace him, keeping the possibility hanging over the probe.

Yet Sawwan hasn’t resumed work, raising concerns among victims’ families that he may have caved to pressure.

Dozens of family members gathered outside his house Monday, urging him to restart the probe.

“We want to know if they are not letting him,” Kayan Tleis, whose 40-year-old-brother was killed in the blast, said in reference to politicians. "This should not be like every time.”

Lebanon’s sectarian-based political factions have had a lock on power in the country for decades and have divvied up posts across the state among themselves. Though rivals, they have a common interest in preventing accountability.

The government also holds enormous sway over the five-member Judicial Council, a special court where it refers security and political crimes. Decisions by the government-appointed judges can’t be appealed.

Human Rights Watch said Sawwan’s appointment process was opaque and the investigation itself, so far secret, has been tainted with political interference. Two judges named by the justice minister before Sawwan were rejected without an explanation by the government-appointed body in charge of approving the selection.

At least 25 people have been held since August under the investigating judge’s powers of unlimited pre-trial detention. He only questioned them once, according to HRW. Most are port staff, including the head of the port authority, a security official and a maintenance engineer, and all face the same litany of charges no matter what their position, said Aya Majzoub, HRW’s Lebanon researcher.

Senior political faction leaders have publicly questioned the course of Sawwan’s investigation or hinted he may be covering up for their rivals.

“Was there something military in the port that led to this explosion? Why not tell the people the truth?” said Nasrallah. Hezbollah has denied claims it stored explosives at the port.

A Hezbollah rival, Druze leader Walid Jumblatt, pointed at the Syrian government, suggesting it imported the explosives through Lebanon because its ports were in the line of fire at the height of Syria’s civil war in 2013.

“There can’t be a probe so long as the judiciary is not independent of Syrian guardianship or from (the president’s) people or Syrian allies,” Jumblatt told Sky News Arabia.

Some described the 60-year-old Sawwan as “brave,” even “suicidal” for taking the post that could endanger his career or his life.

Throughout Lebanon’s history, judges have been threatened, intimidated and even killed. Gunmen sprayed four judges with bullets in court in 1999, killing them on the spot during a murder and drug trafficking trial. In 1977, a judge investigating the killing of a Druze leader was kidnapped in his own car and his house hit with a rocket-propelled grenade.

The 2005 assassination of former Prime Minister Rafik Hariri brought a rare international investigation. Syria, whose forces occupied Lebanon at the time, was considered the prime suspect. The local investigation was scuttled by accusations of political interference.

World powers, whose pressure forced Syrian troops to withdraw, backed a parallel U.N. fact-finding mission and special tribunal. After a drawn-out, 15-year process, the Special Tribunal in The Hague convicted only one of the four defendants, all Hezbollah operatives, with no explanation of who was ultimately behind the killing, disappointing many.

That tribunal also cost millions of dollars, money that Lebanon — broke and struggling with a historic economic crisis — doesn’t have.

Youssef Diab, a Lebanese journalist who covers the courts, said Lebanon doesn’t have the resources or technical capacity to handle an investigation of the explosion’s scope.

“This is a lot graver than the assassination of Rafik Hariri. A city was destroyed, (211) died, 6,000 wounded and many people have not yet returned home. This is a major crime,” he said.

FBI and French investigators conducted a forensic probe after the blast, but their findings remain sealed.

“We can’t rest our hope and faith on a broken system that has proven incredibly resilient. We can’t expect the very people who are implicated in these crimes and other big crimes in Lebanon to lead reform.”

In an investigative report, Lebanese documentary maker Feras Hatoum revealed that the company that bought the ammonium nitrate may have links through shell companies with two Syrian businessmen under U.S. sanctions for their ties to President Bashar Assad. One of them was sanctioned in 2015 for his suspected role in securing explosives for Assad’s forces.

“You need authorities to investigate,” Hatoum told The Associated Press.

Sawwan has not reached out to him yet, but Youssef Lahoud, a lawyer representing victims’ families, said they will include Hatoum’s findings in their case. Lahoud said Sawwan has only two clerks and two trainee judges helping him.

Former state prosecutor Hatem Madi, who investigated political violence before he retired in 2013, said many reasons could have caused Sawwan to halt the probe: crossing a red line, receiving threats or pressure, or because he feared the consequences of his findings.

“Most of the big cases are stopped because of reasons of State,” Madi said.