Nationalists march in Poland amid border crisis with Belarus 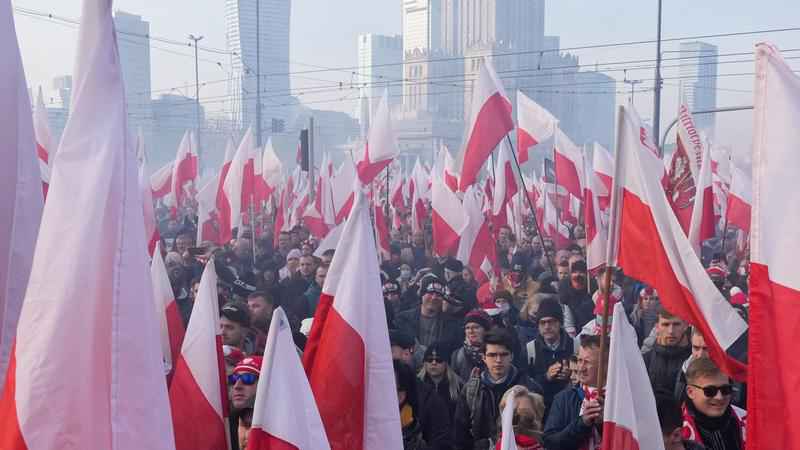 People hold Polish flags during the annual Independence Day march which because of their participation turned violent in recent years, in Warsaw, Poland, on Thursday, November 11, 2021. Warsaw mayor and courts banned this year's event due to its history of violence, but the right-wing ruling authorities defied the ban and gave the march state event status to allow it to go ahead.[AP Photo/Czarek Sokolowski]

Thousands marched in Warsaw on Thursday to mark Poland’s Independence Day, led by far-right groups calling for strong borders, while its troops blocked hundreds of new attempts by migrants to enter the country illegally from neighboring Belarus in a tense political standoff.

Security forces patrolled the capital and other cities for the holiday parades, which were peaceful, unlike in recent years that have seen some violence by extremists.

"We Thank the Defenders of Poland’s Borders," said one banner displayed in Warsaw.

The march was overshadowed by events unfolding along Poland’s border with Belarus, where thousands of riot police and troops are turning back migrants, many from the Middle East, who are trying to enter the European Union. Makeshift camps have sprung up in forests on the Belarusian side near a crossing at the Polish town of Kuznica, and with temperatures falling and access to the frontier restricted, there are fears of a humanitarian crisis.

EU officials have accused Belarus President Alexander Lukashenko of using the migrants as pawns in a "hybrid attack" to retaliate for sanctions imposed on his authoritarian regime for a harsh internal crackdown on dissent.

With the EU weighing new sanctions on Belarus over the border issue, Lukashenko threatened Thursday to cut off Russian natural gas supplies to Europe that pass through a pipeline in his country. "I would recommend the Poles, Lithuanians and other brainless people to think before they talk," he said.

Warsaw’s liberal mayor and courts had banned the march, which celebrates Poland’s statehood, but right-wing authorities in the national government overrode the order and gave the gathering the status of a state ceremony.

The government’s support for the far-right leaders of the march underlined how Poland’s right-wing ruling party wants their support. It also is engaged in a political fight with the EU over Polish changes to the country’s judiciary, viewed in Brussels as an erosion of democratic norms, along with rhetoric seen as discriminatory to LGBT groups.

In 2017, the parade drew tens of thousands and included white nationalist and anti-Semitic slogans. Yet the following year, the president and prime minister and other leaders marched along the same route as the nationalists.

In seeking to ban the march, Mayor Rafal Trzaskowski, an opposition figure, argued that Warsaw, which was razed by Nazi Germany during World War II, is "no place to propagate slogans that have all the hallmarks of fascist slogans."

As Thursday’s march began, groups carried Poland’s white-and-red national flags, but some also waved the green flags of the National Radical Camp displaying a stylized hand with a sword, a far-right symbol dating to the 1930s.

The standoff near the border crossing at Kuznica, 250 kilometers (155 miles) east of Warsaw, was on the minds of many at the march.

Deputy Interior Minister Maciej Wasik tweeted that some of the security forces "will go directly from Warsaw to defend our border with Belarus. When marching, remember this!"

About 15,000 Polish troops have joined riot police and border guards at the border. The Belarusian Defense Ministry accused Poland of an "unprecedented" military buildup there, saying that migration control did not warrant such a force.

The Defense Ministry said Thursday that the migrants made a number of attempts to cross the border since Wednesday, as they have all week.

Near the village of Bialowieza, where a group of a few hundred migrants threw debris across the razor-wire fence at Polish troops and then tried to destroy it, shots were fired in the air to deter them.

Shots also were fired in the air near the village of Szudzialowo after migrants attacked a soldier, the ministry said. "He was hit with a branch on the chest. He fired two warning shots into the air," the ministry said. The soldier was unhurt and the attackers fled into Belarus.

Since the start of the year, there have been 33,000 attempts to cross the border illegally, with 17,000 in October alone, the border guard service said.

The border crisis has been brewing since summer, with migrants trying to cross from Belarus to Poland, Lithuania and Latvia. Many want to head for Germany, but Finland also is a destination.

Poland has taken a hard-line approach, depicting the migrants as dangerous criminals and changing its law to allow the arbitrary rejection of asylum applications, something condemned by the U.N. refugee agency.

While Poland faces censure over its democratic backsliding, it has largely found support on the issue of the border and faced only mild criticism for pushing the migrants back.

German Foreign Minister Heiko Maas said the problem "is not Poland. The problem is Lukashenko and Belarus and its regime, and so Poland has earned our European solidarity in this situation."

German Chancellor Angela Merkel spoke by phone with Russian President Vladimir Putin, Lukashenko’s main ally, for the second time in as many days. The Kremlin said they discussed the Poland-Belarus border and the importance of a "quick settlement" in accordance with international humanitarian norms.

Merkel’s office said she stressed that the crisis was "brought about by the Belarusian regime, which is using defenseless people in a hybrid attack against the European Union."

Moscow and Minsk have close political and military ties, and Russia sent two nuclear-capable strategic bombers on a training mission over Belarus for a second straight day in a strong show of support.

Lukashenko has stressed the need to boost military cooperation in the face of what he has described as aggressive actions by NATO, which includes Poland.

The EU is looking at the role some airlines have played in carrying migrants and asylum-seekers to the bloc’s doorstep, and there are reports that it is mulling sanctions against them.

Russia’s national flag carrier, Aeroflot, strongly denied any involvement saying it isn’t conducting any regular or charter flights to Iraq or Syria and didn’t have any between Istanbul and Minsk.

A Turkish official with direct knowledge of the issue said Turkish Airlines would halt selling tickets to Iraqi and Syrian nationals for flights to Minsk as part of measures being considered by Turkey to help Poland resolve the crisis. The official spoke on condition of anonymity, citing the sensitivity of the issue and because he was not authorized to announce company policy.

== Iraqi Deputy Migration Minister Karim al-Nuri told the Russian state news agency Sputnik that his country will aid in returning its citizens from Belarus if they wish, working through its embassy in Russia, since it does not have one in Belarus.

— The secretary general of the Norwegian Refugee Council, Jan Egeland, said it was "shocking" to see Europe’s inability to properly handle the low number of migrants at the Poland-Belarus border. "A few thousand people at Europe’s Polish border, many of whom have fled some of the worst crises in the world, is a drop in the ocean compared to the number of people displaced to countries that are much poorer elsewhere," he said.