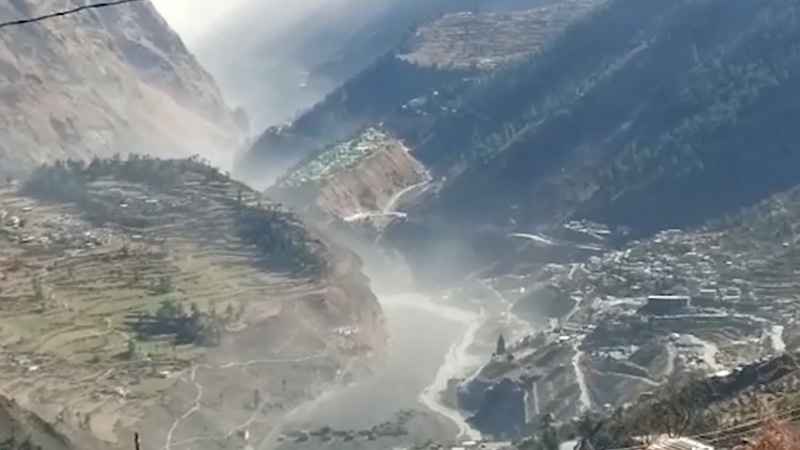 This frame grab from video provided by KK Productions shows a massive flood of water, mud and debris flowing at Chamoli District after a portion of Nanda Devi glacier broke off in Tapovan area of the northern state of Uttarakhand, India, Sunday, Feb.7, 2021. [KK Productions via AP]

Indian authorities launched a search operation Sunday after part of a mountain glacier broke, sending a massive flood of water and debris slamming into two dams and damaging a number of homes. At least nine people were killed and 140 were missing.

The flood was caused when a portion of Nanda Devi glacier broke off in Tapovan area of the northern state of Uttarakhand on Sunday morning. A video shared by officials and taken from the side of steep hillside shows a wall of water surging into one of the dams and breaking it into pieces with little resistance before continuing to roar downstream.

The Rishiganga hydropower plant was destroyed, while the Dhauliganga hydropower was damaged, said Vivek Pandey, a spokesman for paramilitary Indo Tibetan Border Police. Both are on the Alaknanda River, which flows from the Himalayan mountains to the Ganges River.

Pandey said at least 16 workers were trapped near a tunnel at the Dhauliganga project. Another 140 workers at the two plants were missing, he said.

Ravi Bejaria, a government spokesman, said some houses were also damaged in the flooding.

Officials said when the glacier broke it sent water trapped behind it as well as mud and other debris surging down the mountain and into other bodies of water. An advisory was issued urging people living on the banks of the Alaknanda River to move to safer places immediately.

Authorities emptied two dams farther down the river to stop the flood waters from reaching towns of Haridwar and Rishikesh, where popular tourist spots on the banks of the Ganges River were shut and all boating activities were stopped. The Himalayan area has a chain of power projects on the Alaknanda River and its tributaries.

Prime Minister Narendra Modi in a tweet said he was "constantly monitoring the unfortunate situation." He added: "India stands with Uttarakhand and the nation prays for everyone’s safety there."

In 2013, thousands of people were killed in Uttarakhand after heavy rains triggered landslides and floods, washing away thousands of houses and roads and cutting communication links in many parts of the state.