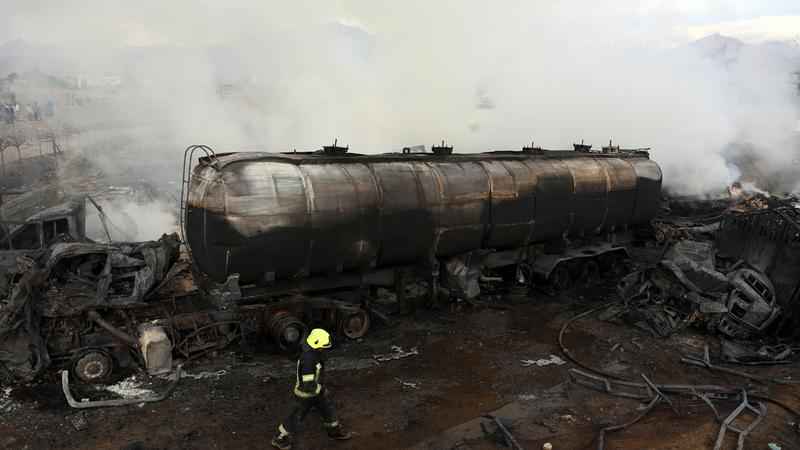 In this file photo, firefighters work to extinguish a burning fuel tanker in Kabul, Afghanistan, Sunday, May 2, 2021. [AP Photo/Rahmat Gul]

The death toll in a bombing that ripped through a mosque in northern Kabul during Friday prayers has jumped to 12, Afghan police said.

Spokesman Ferdaws Faramarz said the imam of the mosque was among the dead, adding that another 15 people were wounded.

The bomb exploded as prayers had begun. No one claimed responsibility for the bombing, but initial police investigations suggest the Imam may have been the target, Faramarz said.

A bombing inside a mosque in a northern Kabul neighborhood killed four worshippers and wounded over 20 others on Friday, Afghan police said.

An image circulating on social media showed three bodies lying on the floor of the mosque, which showed minor damage.

No one immediately claimed responsibility for the explosion. Kabul police say an investigation is underway.

The explosion comes on the second day of a three-day ceasefire announced by the warring Taliban and Afghan government. The pause was for the Islamic festival Eid-al-Fitr, which follows the fasting month of Ramadan.

Until now many of the attacks in the capital have been claimed by the local Islamic State affiliate, but both the Taliban and government blame each other.

The most recent attack last week killed over 90 people, many of them pupils leaving a girls’ school when a powerful car bomb exploded. The Taliban denied involvement and condemned the attack.