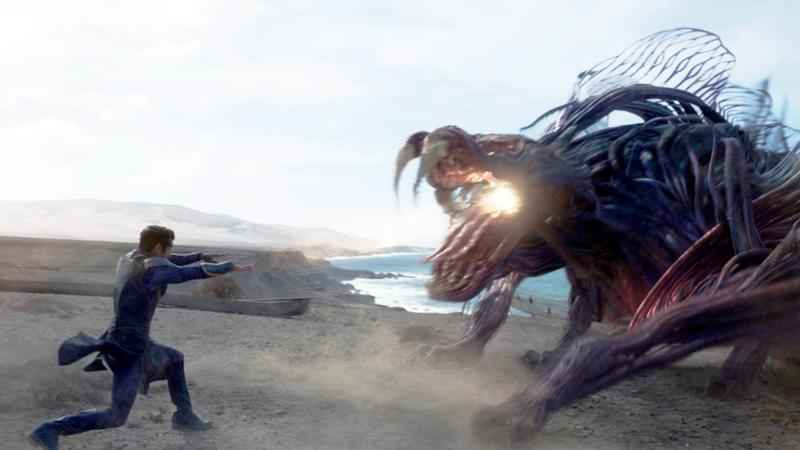 Disney and Marvel’s “Eternals” took a steep drop in its second weekend in theaters, but it’s still hanging on to first place ahead of newcomers like “Clifford the Big Red Dog.”

“Eternals” added $27.5 million over the weekend, bringing its domestic total to $118.8 million, according to studio estimates Sunday. The film, directed by Oscar-winner Chloé Zhao and starring Angelina Jolie, Kumail Nanjiani and Gemma Chan, fell 61% from its debut. Though not uncommon for a big superhero tentpole, it was significantly steeper than the 52% drop seen by the last Disney and Marvel offering, “Shang-Chi and the Legend of the Ten Rings.”

Both played exclusively in theaters, but the main difference is that “Shang-Chi” simply got better ratings from audiences and critics. “Shang-Chi” also became available to stream on Disney+ this weekend. “Eternals” has made $281.4 million globally to date.

Second place went to “Clifford the Big Red Dog,” which opened in theaters during the week and was also available to stream at home for Paramount+ subscribers. It made an estimated $16.4 million from 3,700 theaters over the weekend and $22 million across its five days in release.

Though critics were not impressed (it has a 48% on Rotten Tomatoes), audiences were more favorable, giving it a promising A CinemaScore. And “Clifford” managed to do this in the face of uncertain moviegoing conditions for families.

Blockbusters rounded out the top five with “Dune” in third place with $5.5 million, “No Time to Die” in fourth with $4.6 million and “Venom: Let There Be Carnage” in fifth with $4 million. Notably, “Venom 2” this weekend became only the second pandemic-era film to cross the $200 million mark at the domestic box office. The other was “Shang-Chi.”

More and more awards hopefuls are entering the specialty box office as well, and many are making their way into the top 10. This weekend Kenneth Branagh’s semi-autobiographical film “Belfast” made $1.8 million from 580 screens in its debut. In its second weekend, “Spencer,” featuring Kristen Stewart as Princess Diana, pulled in $1.5 million from 1,265 screens. And even in its fourth weekend, Wes Anderson’s “The French Dispatch" continues to do well, adding $1.8 million and bringing its total to $11.6 million.