The devastation and destruction in Ukraine have been going on for a month now.

“The city of Mariupol does not exist anymore,” says Alexandra Solovey. “As long as these bombings, these shellings, these missile hits, as long as that continues, there is no peace.”

A Minnetonka clinical psychologist, Solovey was born and raised in Kyiv until she was fifteen.

Her family moved to Israel for a decade, then to Minnesota.

She says the Russian invasion of her home country is personal. 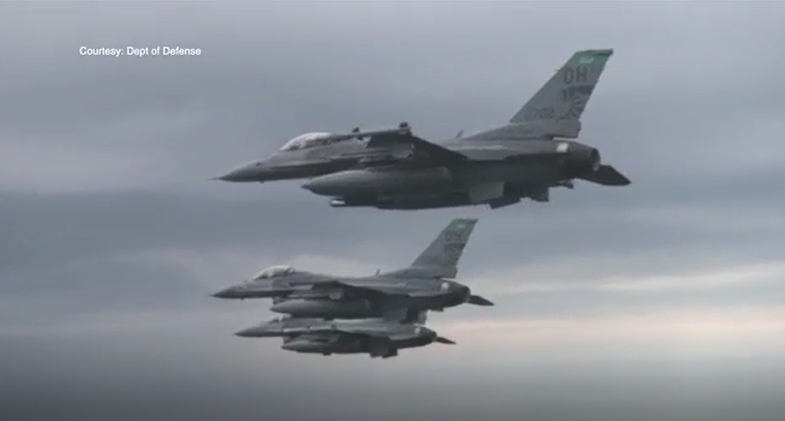 Military planes during flight (US Department of Defense)

“The area that I grew up in Kyiv was bombed,” Solovey says. “I think it has been bombed for two nights in a row, and I can’t even describe the feelings that I have, that my family has when you think about it.”

She and other members of Minnesota’s Ukrainian community have actively supported the idea of a no-fly zone over Ukraine, also known as ‘open skies’ to stop Russian forces in the air.

“They are now annihilating Ukrainian cities,” Solovey declares. “We do not believe as a community that it’s realistic that if we starve the Russian people, Putin will give up and say ‘okay, my bad, I’m going back to Moscow.'”

President Biden has not ordered the no-fly zone, saying it would lead to World War III.

But the U.S. is sending humanitarian and military assistance.

But what exactly does a no-fly zone do?

“A no-fly zone is when one country declares that another country’s military cannot operate,” explains Mary Curtin, a diplomat-in-residence at the University of Minnesota. “Where the first country that would be the U.S., announces that it will take military action against the aircraft and possibly the bases from which the aircraft launched. So it would be a direct military confrontation with Russia.”

But Curtin, a 25-year veteran of the U.S. State Department, says it may not prove effective in this situation.

She says much of Russia’s firepower is from ground-based artillery, rockets fired from tanks, and short-range missiles, none of which would be part of an air attack.

“Even if you stopped airplanes from flying, you would still have the fact that Russia has invaded with an enormous ground force that has a tremendous capacity to destroy buildings like we’re seeing,” Curtin notes.

She says President Biden faces a delicate balance about Russia’s use of force.

“As horrific as this war in Ukraine is, he and many others do not want it to get any worse, or spread any farther,” Curtin says. “In particular, he has deep concern about Russia using nuclear weapons, not only in Ukraine but potentially broader.”

Solovey says on Monday, she and a dozen other members of the Ukrainian community had a zoom meeting with Minnesota congressman Dean Phillips.

“We all felt that Rep. Phillips was incredibly supportive and very understanding of the Ukrainians’ plight,” she says.

Solovey adds Phillips echoed the stance of the White House, that a no-fly zone is off the table.

In a statement sent to 5 EYEWITNESS NEWS, the congressman said ‘it’s important to amplify these stories (of Ukrainians) to show the world the human toll of Putin’s illegal invasion.’

He said he voted for nearly $14 billion in emergency funding for Ukraine.

“At this time, it is critical that President Biden have every diplomatic tool at his disposal to hold Putin accountable, while avoiding an all-out war with Russia,” the statement says. “That is why Representative Phillips introduced bipartisan legislation to impose a travel ban on Putin, members of his regime and other Russian elites, and voted for $13.6-billion in emergency funding to support the Ukrainian people and defend global democracy in the wake of Russia’s unprovoked attack.”

Solovey says during that meeting, Phillips pledged the U.S. would continue providing resources as long as Ukrainian forces keep fighting— and will take an active role in rebuilding that country when the war ends.

She also hopes the U.S. and its allies will somehow develop another strategy to defend Ukrainian skies.

“I don’t want World War III; I don’t think anyone wants World War III,” Solovey declares. “Some sort of air defense umbrella that will keep it from happening. A more powerful defense system.”