The Byron Public School District says Ukrainian flags will not be allowed in classrooms or on school property following legal guidance from its attorneys.

ABC 6 NEWS, a 5 EYEWITNESS NEWS affiliate, reports that the issue was brought in front of the school board this week after a teacher says she was asked to take down her Ukrainian flag from her classroom. She and other teachers spoke before the board in opposition to the district’s policy.

“The decision to not hang the Ukrainian flag or any flag really in our building or classroom, is because it is advice from our lawyers,” said Superintendent Dr. Mike Neubeck, “once you hang a flag from a group or that type of a flag, that it opens up for other groups to come in and say we want this flag to be hung and if another staff member wants this flag to be hung, then we have to say yes to that as well, because it’s part of that First Amendment speech.”

On Wednesday Neubeck issued a letter to teachers and staff saying it was not an easy decision for the school board.  He says the district continues to encourage the lessons and conversations in classrooms about the crisis in Ukraine.

“We have also informed staff that if kids want to be activists and want to do something for the people of Ukraine, help them find ways to do that, we are not saying we are not for it, we are just saying that we really have to protect ourselves by not hanging that flag,” Neubeck said.

Co-President of the Byron teachers union, Justin Blom, who is also a fifth grade teacher says he disagrees with the districts policy.   He says as educators, this is an opportunity to teach and empower students. 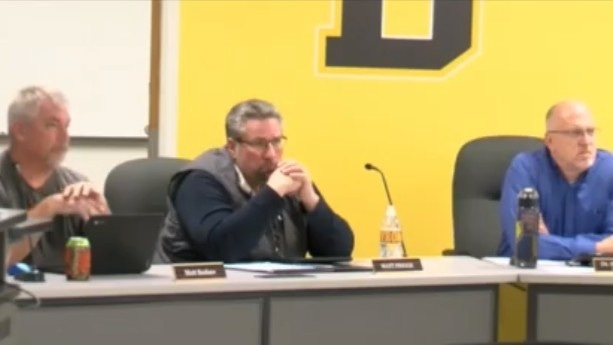 The Byron School Board during a discussion of the Ukrainian flag inside a classroom. (KAAL)

Blom argues, the war in Ukraine, should not be political.

“I respect that they are following legal advice, but where does this end?” asked Blom.  “What future humanitarian crisis will we not be allowed to support because there might be one percent of the people who view the other side?”

Blom says the teachers union appreciates the open and transparent conversation with the school district. He says they will however, continue to have discussions with Education Minnesota and the school district about possibly reviewing its interpretation of the policy.

The Byron Public School District says it welcomes those talks.

On Thursday, Blom sent another statement to 5 EYEWITNESS NEWS saying “Our hope is for the district to reconsider their interpretation of school policy or revise school policy to allow our students to display support for the Ukrainian citizens. We teach our students to be upstanders to bullies and support those who have been bullied. This gives our students an opportunity to be upstanders to the world’s biggest bully, Vladimir Putin. The district could also pass a resolution calling the crisis in Ukraine a humanitarian crisis and any display of support would be school sponsored.”