US economy slowed but still grew at 2.9% rate last quarter

By PAUL WISEMAN The Associated Press

FILE - An employee works in the battery assembly hall at the BMW Spartanburg plant in Greer, S.C., Wednesday, October 19, 2022. On Thursday, the Commerce Department issues its first of three estimates of how the U.S. economy performed in the fourth quarter of 2022.(AP Photo/Sean Rayford, File)[ASSOCIATED PRESS/Sean Rayford]

WASHINGTON (AP) — The U.S. economy expanded at a 2.9% annual pace from October through December, ending 2022 with momentum despite the pressure of high interest rates and widespread fears of a looming recession.

Thursday’s estimate from the Commerce Department showed that the nation’s gross domestic product — the broadest gauge of economic output — decelerated last quarter from the 3.2% annual growth rate it had posted from July through September. Most economists think the economy will slow further in the current quarter and slide into at least a mild recession by midyear.

The economy got a boost last quarter from resilient consumer spending and the restocking of supplies by businesses. Federal government spending also helped lift GDP. But with higher mortgage rates undercutting residential real estate, investment in housing plummeted at a 27% annual rate for a second straight quarter.

The economy’s expected slowdown in the months ahead is an intended consequence of the Federal Reserve’s aggressive series of rate increases. The Fed’s hikes are meant to reduce growth, cool spending and crush the worst inflation bout in four decades. Last year, the Fed raised its benchmark rate seven times. It is set to do so again next week, though this time by a smaller amount.

Ford F150 trucks are displayed at a Gus Machado dealership Monday, Jan. 23, 2023, in Hialeah, Fla. On Thursday, the Commerce Department issues its first of three estimates of how the U.S. economy performed in the fourth quarter of 2022.(AP Photo/Marta Lavandier)

FILE - Vineyard worker Gerardo Solano loads bins of Cabernet Sauvignon grapes onto a trailer during harvest at Inglenook in Rutherford, Calif., Wednesday, Sept. 21, 2022. On Thursday, the Commerce Department issues its first of three estimates of how the U.S. economy performed in the fourth quarter of 2022. (AP Photo/Eric Risberg, File) 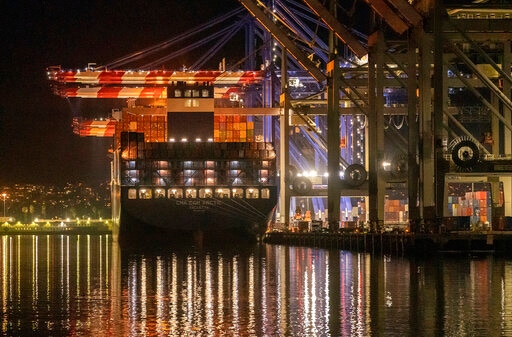 FILE - The Container ship Cam Cgm Arctic (MT) is moored at Maersk APM Terminals Pacific, Pier 400, at the Port of Los Angeles on Monday, Nov. 21, 2022. On Thursday, the Commerce Department issues its first of three estimates of how the U.S. economy performed in the fourth quarter of 2022. (AP Photo/Damian Dovarganes, File)

The resilience of the U.S. job market has been a major surprise. Last year, employers added 4.5 million jobs, second only to the 6.7 million that were added in 2021 in government records going back to 1940. And last month’s unemployment rate, 3.5%, matched a 53-year low.

“The news couldn’t have been any better,” President Joe Biden said of Thursday’s GDP report. “We’re moving in the right direction. Now, we’ve got to protect those gains.”

Yet the good times for America’s workers aren’t likely to last. As higher rates make borrowing and spending increasingly expensive across the economy, many consumers will spend less and employers will likely hire less.

“Recent data suggest that the pace of expansion could slow sharply in (the current quarter) as the effects of restrictive monetary policy take hold,” Rubeela Farooqi, chief U.S. economist at High Frequency Economics, wrote in a research report. “From the Fed’s perspective, a desired slowdown in the economy will be welcome news.”

Consumer spending, which fuels about 70% of the entire economy, rose at a sturdy 2.1% annual rate from October through December, down slightly from 2.3% in the previous quarter.

More recent numbers, including a 1.1% drop in retail sales last month, indicate that consumers have begun to pull back.

“That suggests higher rates were starting to take a bigger toll and sets the stage for weaker growth in the first quarter of this year,’’ said Andrew Hunter, senior U.S. economist at Capital Economics.

Economists at Bank of America expect growth to slow to a 1.5% annual rate in the January-March quarter and then to contract for the rest of the year — by a 0.5% rate in the second quarter, 2% in the third and 1.5% in the fourth.

The Fed has been responding to an inflation rate that remains stubbornly high even though it has been gradually easing. Year-over-year inflation was raging at a 9.1% rate in June, the highest level in more than 40 years. It has since cooled — to 6.5% in December — but is still far above the Fed’s 2% annual target.

“The U.S. economy isn’t falling off a cliff, but it is losing stamina and risks contracting early this year,” said Sal Guatieri, senior economist at BMO Capital Economics. “That should limit the Fed to just two more small rate increases in coming months.”

One additional threat to the economy this year is rooted in politics: House Republicans could refuse to raise the federal debt limit if the Biden administration rejects their demand for broad spending cuts. A failure to raise the borrowing cap would prevent the federal government from being able to pay all its obligations and could shatter its credit.

Moody’s Analytics estimates that the resulting upheaval could wipe out nearly 6 million American jobs in a recession similar to the devastating one that was triggered by the 2007-2009 financial crisis.

At least the economy is likely beginning the year on firmer footing than it did at the start of 2022. Last year, the economy shrank at an annual pace of 1.6% from January through March and by a further 0.6% from April through June. Those two consecutive quarters of economic contraction raised fears that a recession might have begun.

On corporate earnings calls for the April-June quarter of 2022, nearly half of companies in the S&P 500 had cited a “recession” — the highest such proportion since 2010 — according to the data provider FactSet. Forecasters at Bank of America and Nomura had predicted that a recession would hit by the October-December quarter.

But the economy regained strength over the summer, propelled by resilient consumer spending and higher exports.