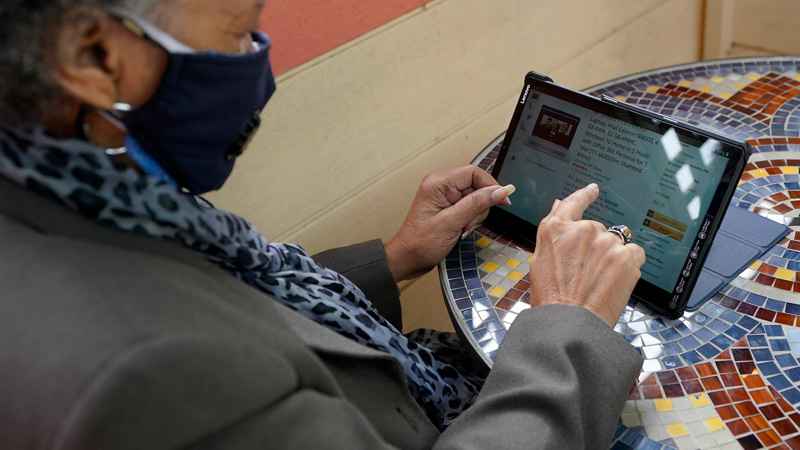 Lynnette White uses her tablet while interviewed in San Francisco, Tuesday, Feb. 16, 2021. The pandemic has sparked a surge of online shopping across all ages as people stay away from physical stores. But the biggest growth has come from consumers 65 and older.[AP Photo/Jeff Chiu]

In November, Paula Mont did something new: The 86-year-old, who hasn’t left her New Jersey senior living community in nearly a year, went shopping — online.

Mont used an iPad, equipped with a stylus to help her shaky hands, to buy a toy grand piano for her great-granddaughter. She picked it out from more than a dozen versions of the instrument on Amazon.

“It is like a wow feeling. I found it!” Mont said.

The internet has become a crucial link to the outside world during the pandemic, one that millions of people still don’t have access to. Among older adults, the lack of internet has even impeded their ability to get vaccinated.

But the pandemic has also motivated many who have been isolated at home or unable to leave their senior communities to learn something they may have resisted until now: how to buy groceries and more online.

Americans 65 and older rang up an average of nearly $187 per month online last year, up 60% from a year earlier, according to market research firm NPD Group’s Checkout Tracking. They still spend less than the average $238 per month by the total population, but they are the fastest-growing group of online shoppers by age group.

Shopping is one of a slew of activities that older Americans now have to do over the internet, like doctor’s appointments and socializing via digital video like FaceTime. Such behavior was forced by necessity — older people face the biggest risk of infection, so it’s more dangerous for them to go out.

The transition online hasn’t always been easy, and children and senior living staff often have to help, an experience that can be both gratifying and difficult.

Barbara Moran, director of social programs for Atria Senior Living where Mont lives, says one of the biggest challenges residents face with their devices is that they are used to pushing, not tapping, as if they’re using a touch-tone telephone. She has to repeat tips often.

“I would lie if I didn’t say I was frustrated sometimes,” said Moran, who sits with Mont — masked and gloved — in the facility’s dining room for weekly shopping sessions.

Diane Shein, 73, from Bonita Springs, Florida, turned to Instacart and Amazon-owned Whole Foods for groceries because of the pandemic.

Instacart president Nilam Ganenthiran predicted that online groceries will be a “new normal” for older people even when the pandemic ends.

Still, there are many barriers, from struggling to use new technology to high prices to access.

People 65 and older are less likely than younger people to have home internet or a smartphone. Nearly 22 million, or 42% of Americans 65 and older, lack broadband at home, according to a 2021 study from nonprofit Older Adults Technology Services. Low-income and Black and Latino older adults are more likely to be left out, the study says.

“We are asking them to stay at home, and yet a lot of seniors are not connected,” said Lauren Cotter of the Community Tech Network, a San Francisco nonprofit that trains low-income residents on technology and provides free tablets and hotspots.

Those with devices and internet may wrestle with how to use an app or fear giving out personal information because they worry about fraudsters. Online shopping scams cost Americans $245.9 million last year, according to the Federal Trade Commission. And online grocery shopping, which includes tips and delivery charges, costs more than going to stores.

The pandemic has also exposed the shortcomings of the internet, which often fails to accommodate people with disabilities or an aging population with visual and hearing issues.

Iris Berman, 93, lives in an assisted living center in San Francisco and used to buy her shoes online. As her eyesight worsened, her son Ed Berman, who works in technology, would help her by sharing her screen virtually. He took over her shopping completely during the pandemic because her vision loss was so severe.

“None of these websites works well when they’re enlarged,” he said.

Then there’s the simple fact that older people did not grow up with the internet so things may not come as intuitively compared with those who have.

Lynnette White, 72, buys clothes and household items from Amazon and Target online on her iPhone. But she finds other apps, including the Safeway grocery one, too hard to navigate. When she tries to check out her shopping cart, she finds herself starting all over again. She says it’s frustrating that there are are too many steps.

Still, she said she likes learning new skills and her grandchildren, who she sends Amazon gift cards as presents, approve.

“They’re very impressed that at my age I am excited about technology,” White said.