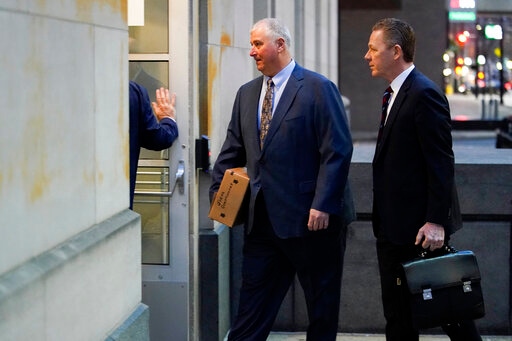 Steven Staub, the company’s vice president and treasurer, told jurors on the second day of Householder’s corruption trial that power prices had gotten so low in the years leading up to the bill’s passage in 2019 that the Davis-Besse and Perry power plants in northern Ohio couldn’t cover costs, let alone make a profit.

Staub said the plants were contributing nothing to the company’s bottom line but eating up 90% of executives’ time. Meanwhile, FirstEnergy shareholders were pressuring the company to exit the unprofitable business of unregulated power generation altogether, he said.

FirstEnergy’s desperate financial situation at the time of the alleged bribery scheme was among issues raised in second-day testimony as federal prosecutors argue their case against Householder and lobbyist Matt Borges, a former chair of the Ohio Republican Party, in U.S. District Court.

Another line of questioning focused on the limits imposed on operations of 501(c)4 nonprofit groups, often called “dark money” groups because they may accept unlimited contributions and aren’t required to report donors.

An indictment alleges Householder, Borges, three other people and a dark money group called Generation Now orchestrated an elaborate scheme, secretly funded by FirstEnergy, to secure Householder’s power, elect his allies, pass legislation containing a $1 billion bailout for the two nuclear plants and then sabotage an effort to overturn the bill by placing a referendum on Ohio’s statewide ballot. The arrests came in July 2020.

Under a deal to avoid prosecution, Akron-based FirstEnergy admitted to using a network of dark money groups to fund the scheme and to bribing the state’s top utility regulator. Sam Randazzo, at the time the chair of the Public Utilities Commission of Ohio, resigned after an FBI search of his home. He has not been charged and denies wrongdoing.

Two Householder associates, Jeff Longstreth and Juan Cespedes, and Generation Now have pleaded guilty. Longstreth and Cespedes are among witnesses scheduled to appear in the trial, which could last six weeks. A third defendant who pleaded not guilty died by suicide.

Charles Walker, an expert in nonprofit organizations for the Internal Revenue Service, told jurors Tuesday that 501(c)4 organizations are social welfare organizations whose efforts should benefit the broader community. They are not allowed to be used for a person’s own private purposes or to benefit insiders or unnamed outsiders with outsized control over their operations, he said.

Householder’s attorney asked Walker to clarify: Could dark money groups legally accept unlimited donations, support political candidates, lobby for causes and pay their own employees? Walker answered yes — but only as long as they met those other requirements.

Assistant U.S. Attorney Emily Glatfelter spent much of the afternoon entering tens of thousands of documents into the court record, including business records from a host of nonprofits, bank records, photos, legislative documents, videos, and records of calls to and from Householder’s home phone.

Blane Wetzel, the FBI agent in charge of the Householder case, began his testimony Tuesday detailing the evidence gathered by the government against the parties.