By RONALD MONTOYA The Associated Press 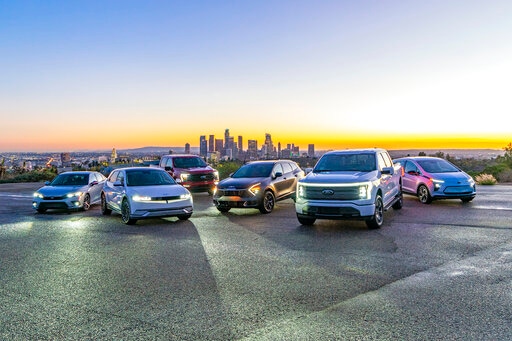 This undated photo provided by Edmunds shows their top rated car, SUV, truck and an electric version for each category. (Rex Tokeshi-Torres/Edmunds via AP)[ASSOCIATED PRESS/Rex Tokeshi-Torres]

Every year Edmunds’ experts put their heads together to determine the best new vehicles on sale. Spread across six categories, the annual Edmunds Top Rated Awards are given to the cars, trucks and SUVs that rank at the top of their class according to Edmunds’ vehicle testing program. That means each winner has been tested at the Edmunds test track and thoroughly evaluated over many miles of real-world use.

Edmunds came up with six winners for best car, SUV, truck and the electric versions of each. Some vehicles are repeat winners while others are new champions. We’ve listed the vehicles below, sorted by vehicle type. All prices include destination charges.

Edmunds says: The Honda Civic has won Edmunds Top Rated twice in a row and for two good reasons. First, there’s the optional turbocharged engine. It gives you more power and better fuel efficiency than the base model. The other is that it provides an ideal combination of practicality, easy-to-use tech interface and engaging driving characteristics.

Counterpoint: Road noise is noticeable at highway speeds and the driver assist features give a few too many false alarms.

Edmunds says: Price has long been a barrier for people looking to get an electric vehicle but that barrier is pretty low with the Chevrolet Bolt. The Bolt received a significant price reduction last year and can be even less expensive for buyers who can qualify for the Bolt’s available federal $7,500 tax credit. The Bolt is a small car but there is plenty of usable space inside for most people. It’s also fun to drive and convenient and maneuverable to park.

Counterpoint: The Bolt’s cargo area is smaller when compared to its competition. Also, the Bolt’s DC fast-charging speed is slower than its competitors.

Edmunds says: Modern trucks need to be like Swiss Army knives for many Americans. For some, they’re the lifeblood of their business. For others, they’re off-road adventure machines for weekend warriors. And for still others, they’re the new American family car. The Ford F-150 is another repeat winner in its category, as there is an F-150 for every wallet and purpose. It can even be equipped with innovative features you won’t find on any other truck on the market.

Edmunds says: It was a field of two in the new category of electric pickup truck this year: the Rivian R1T and the Ford F-150 Lightning. For most Americans, the F-150 Lightning is going to be a better experience overall. It has plenty of range and power for an EV without being over the top or quirky. Nearly all of the regular F-150′s qualities are present here as well. Think of it as a regular F-150 that just happens to be electric.

Counterpoint: Maximum range is capped at 230 miles without the pricey extended-range battery. Also, pricing for the Lightning’s upper trim levels is pretty high.

Edmunds says: The Kia Sportage Hybrid dethroned the three-peat champ, Kia Telluride. People will take notice when you’re in a Kia Sportage Hybrid because it looks like nothing else on the road. The Sportage is one of the least expensive ways to get a hybrid in a compact SUV, and it doesn’t feel like you’ve compromised on modern features. It offers more power than the gas model plus better fuel economy.

Counterpoint: You’re limited to the base trim if you want front-wheel drive instead of the more expensive all-wheel drive. Also, the Sportage’s handling isn’t particularly engaging.

Edmunds says: The Hyundai Ioniq 5 is the best example of how an EV should serve its buyer. It has respectable range on a full charge, a high-tech interior, fast charging speed and unique style. The Ioniq 5 is also comfortable and surprisingly fun to drive. It isn’t a flashy exotic electric, but it does have an X-factor that other automakers may struggle to replicate anytime soon.

Counterpoint: Poor rear visibility can be an issue, and the front trunk and rear cargo area are smaller than in some competitors.

Save time on researching your next vehicle purchase by checking out the Edmunds Top Rated award winners for 2023. Head over to Edmunds to see the full list of winners and then go test-drive them for yourself and see if you agree with our picks.

This story was provided to The Associated Press by the automotive website Edmunds.

Ronald Montoya is a contributor at Edmunds.