By MARK ANDERSON The Associated Press

LAS VEGAS (AP) — The Kansas City Chiefs don’t believe in simply wrapping up the AFC’s top seed. They want to have fun doing it.

Late in the first half Saturday against the Las Vegas Raiders, the Chiefs huddled and spun in a circle, broke out into the shotgun with running back Jerick McKinnon taking a direct snap. He faked a handoff to Kadarius Toney and pitched to quarterback Patrick Mahomes, who then threw to Toney for a 9-yard touchdown.

But, it didn’t count. A holding penalty brought back the play. The Chiefs then scored anyway to take full control of what became a 31-13 victory.

The play is called the Snow Globe or Arctic Circle, depending on who is asked. But, even if it didn’t count, it underscored the Chiefs’ creativity and willingness to have fun, even while playing for playoff positioning and a week off.

“We talked about it on the side, ‘Let’s see if we can get some confusion going and throw something back.'” Mahomes said. “It worked. We just had the holding penalty. We got some good things going for the playoffs, and whatever we run has to work.”

Kansas City Chiefs wide receiver Kadarius Toney, left, is congratulated by JuJu Smith-Schuster (9) after scoring on a touchdown run during the first half of an NFL football game against the Las Vegas Raiders Saturday, Jan. 7, 2023, in Las Vegas. (AP Photo/John Locher) 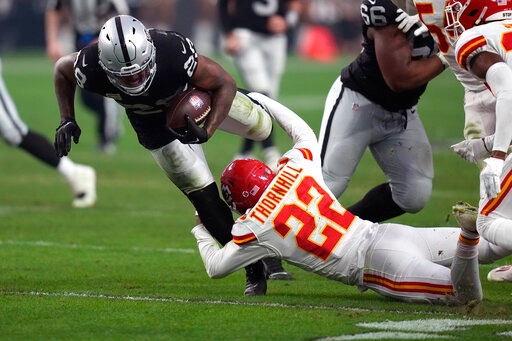 That, Chiefs coach Andy Reid said, was the bottom line.

Almost lost was the NFL record for total yards in a season that Mahomes set. He passed for 202 yards and rushed for 29 against the Raiders, giving him 5,608 total yards this season. That surpassed the record of 5,562 yards set by Drew Brees in 2011 with the New Orleans Saints.

“Pat was on fire,” Reid said. “He’s throwing these (statistics) out there like they’re nothing.”

More than setting the mark, Mahomes helped ensure the top seed for the Chiefs (14-3) and a bye in the first round of the playoffs, which begin next weekend. Kansas City, however, is not assured of home-field advantage throughout the postseason.

This was the first NFL game played since Hamlin was hospitalized. Both teams wore black shirts in warmups that read “LOVE FOR DAMAR” with his No. 3 in the middle. Mahomes also wore a hoodie that had a drawing of the player with “HAMLIN STRONG” below it.

Instead of a moment of silence before the game, the Allegiant Stadium public-address announcer asked fans to cheer on Hamlin’s recovery.

“It was definitely weird,” Mahomes said of returning to the field. “It’s a game that you love, you play your entire life. It’s brought so many great things to you. But, obviously, with the situation that happened Monday night with Damar, you still have that in the back of your mind. You want to be there for him, and there is so much stuff bigger than football.”

The Chiefs matched their franchise record for regular-season victories, set in 2020, and they set a team mark with their 17th consecutive game of at least 300 yards of offense.

The Raiders (6-11) ended their first season under coach Josh McDaniels with three consecutive losses and four defeats in five games. They made the playoffs a year ago, but now face serious questions at quarterback, offensive line and throughout the defense.

Jarrett Stidham started his second game in a row in place of the sidelined Derek Carr, and this performance didn’t go nearly as well as the first one. Stidham completed 22 of 36 passes for 219 yards with a touchdown and interception. He was sacked six times.

A week ago, he threw for 365 yards and three touchdowns in a 37-34 overtime loss to the San Francisco 49ers.

Stidham said he hasn’t thought much about trying to retain the starting job next season with the Raiders.

“Do I feel like I’m that caliber player in this league?” he said. “Absolutely. I just tried to be ready for my opportunity these last two weeks and try to take full advantage of it.”

Raiders running back Josh Jacobs, who was dealing with hip and oblique injuries as well as a reported family emergency, was a game-day decision but played. He rushed for 45 yards and could possibly win the NFL rushing title with 1,653 yards.

But Jacobs fell short of the franchise rushing record of 1,759 yards set by Marcus Allen in 1985. This was potentially Jacobs’ final game as a member of the Raiders because his fifth-year option was not picked up. His performance this season has given Las Vegas officials plenty to consider.

Chiefs linebacker Nick Bolton made 16 tackles, giving him 180 for the season and breaking the team record of 179 set by Derrick Johnson in 2011. … Kansas City running back Jerick McKinnon has caught a touchdown pass in six consecutive games. He has nine TDs total over that span. … Chiefs rookie defensive end George Karlaftis has 5½ sacks in seven games. … Kansas City tight end Travis Kelce caught six passes for 38 yards, giving him 110 receptions this season, just one off the Chiefs’ mark set by Tyreek Hill last season.

Raiders: Las Vegas has some major decisions to make with its roster now that its season is over.