How (and where) to watch Oscar-nominated films online

By NARDOS HAILE The Associated Press 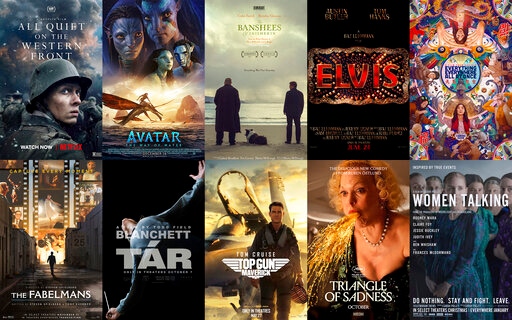 This combination of photos shows promotional art for Oscar nominees for best feature, top row from left, "All Quiet on the Western Front," "Avatar: The Way of Water," "The Banshees of Inisherin," "Elvis," "Everything Everywhere All at Once," bottom row from left, "The Fabelmans," "Tár," "Top Gun: Maverick," "Triangle of Sadness," and "Women Talking." (Netflix/Disney/Searchlight/Warner Bros./A24/Universal/Focus/Paramount/Neon/Orion-United Artists via AP)[ASSOCIATED PRESS]

Replete with spellbinding multiverses, “Everything Everywhere All at Once” topped the 95th Academy Awards nominations with 11 nods. Elsewhere, stories of friendship and family permeated 2022 cinema and the nominations this year, as did big-budget blockbusters.

Some of the nominated films are still in theaters but many are also available online to stream now. Here’s where you can find the movies:

“EVERYTHING EVERYWHERE ALL AT ONCE”

The A24-produced indie “Everything Everywhere All at Once” has been a critical success and crowd-pleaser since it came out last spring. The film is nominated for best picture and Michelle Yeoh, Ke Huy Quan, Stephanie Hsu and Jamie Lee Curtis received nods for their performances. Yeoh, Quan and Hsu carry a mind-bending multiverse story about a Chinese American family’s disconnection and how they find each other again through the existence of other versions of themselves. The film is available for streaming on Paramount+ with a Showtime add-on.

This combination of images shows promotional art for Oscar nominees for best animated feature film, from left, "Guillermo del Toro's Pinocchio," "Marcel the Shell with Shoes On," "Puss in Boots: The Last Wish," "The Sea Beast," and "Turning Red." (Netflix/A24/Universal/Netflix/Walt Disney via AP)

This combination of photos shows Oscar nominees for best performance by an actor in a leading role, from left, Austin Butler in "Elvis," Colin Farrell in "The Banshees of Inisherin," Brendan Fraser in "The Whale," Paul Mescal in "Aftersun," and Bill Nighy in Living. (Warner Bros/Searchlight/A24/A24/Sony Pictures Classics via AP)

“THE BANSHEES OF INISHERIN”

Securing a best picture nomination and nods for Colin Farrell, Brendan Gleeson and Kerry Condon, “The Banshees of Inisherin” tells a tale of the ebbs and flows of the friendship between Farrell’s Pádraic and Gleeson’s Colm while highlighting haunting Irish landscapes. It can be streamed on HBO Max and rented on YouTube and Amazon.

“ALL QUIET ON THE WESTERN FRONT”

“All Quiet on the Western Front,” an unflinching German-language adaptation of a classic antiwar novel about life and death in the World War I trenches, is nominated for best picture and a slew of other Oscars. The film is available to stream on Netflix.

In “Elvis,” Baz Luhrmann’s vision transforms the relatively unknown former child actor Austin Butler into the King. The unconventional biopic tells the life of Elvis Presley from the perspective of his former manager, Colonel Tom Parker, played by Tom Hanks. Butler snagged a best actor nomination and the film received a nod for best picture and director. The film is available to stream on HBO Max.

Steven Spielberg’s most personal film yet documents the joys and ultimate perils that fragment the Fabelman family forever. In a love letter to film and his family, Spielberg allows viewers to see behind his passion for film and his search for the meaning of family and life. Spielberg is nominated for best director and his film is nominated for best picture, while Michelle Williams up for best actress. The film is available to purchase on Amazon.

Cate Blanchett plays a renowned conductor, Lydia Tár. As the titular character, she is cunning, talented and on too high of a pedestal to fall — but she does. “Tár,” which is nominated for best picture and best actress, deals with the dichotomy between power and art and takes on the culture wars dominating politics and popular discourse. It is available for rent and purchase on Amazon and iTunes and will stream exclusively on Peacock beginning Jan. 27.

“AVATAR: THE WAY OF WATER”

After a 13-year wait, “Avatar: The Way of Water” delves into the journey of original “Avatar” main character Jake Sully’s family through adversity and loss. Director James Cameron builds a spiritual and visually compelling world in this sequel that stars Sam Worthington and Zoe Saldaña. Nominated for best picture, the film is still in theaters and is not yet available for streaming.

Swedish filmmaker Ruben Östlund has created a prickly social satire examining race, wealth, social class and inequality and secured a best director nomination in the process. It stars the late Charlbi Dean and Harris Dickinson as a model/influencer couple who end up on a sponsored yacht trip with other wealthy guests. Chaos ensues when the yacht gets stuck in the middle of a storm and the guests end up on a deserted island. The film later focuses on maid-turned-ringleader Abigail, played by Dolly De Leon. The film is nominated for best picture and it is available to rent on YouTube, Apple TV and Amazon.

Brendan Fraser receives a best actor nod for his portrayal of Charlie, the 600-pound central character of “The Whale.” Charlie is a father, an English teacher and has terminal health issues that give him a life expectancy of a week. In that week, he attempts to bond with his estranged daughter. The film is based on and adapted from the off-Broadway play by Samuel D. Hunter and also earned a best supporting actress nod for Hong Chau. The film is still in theaters and is not yet available for streaming.

From “La La Land” director Damien Chazelle comes a journey into 1920s Hollywood hedonism and a drug-fueled fever dream of the bygone cinematic era. The film stars Margot Robbie, Brad Pitt and newcomer Diego Calva in a three-hour story about filmmaking at a crucial time for American cinema. Earning only three below-the-line nominations, the film is still in theaters and is not yet available for streaming.

Director Sarah Polley weaves the story of pervasive sexual assault plaguing the women in a Mennonite community. “Women Talking” is an adaptation of a 2018 book by Miriam Toews. It stars Claire Foy, Rooney Mara and Frances McDormand. The best picture nominee is still in limited theaters and is not yet available for streaming.

Angela Bassett has been nominated for best supporting actress in “Black Panther: Wakanda Forever,” a superhero movie made in the wake of the death of Chadwick Boseman. She becomes the first actor nominated for a Marvel role. Director Ryan Coogler’s film allows the audience to grieve the character T’Challa and Boseman. The film is still in theaters but is coming to Disney+ on Feb. 1.

Brian Tyree Henry snags a best supporting actor nod in “Causeway,” an Apple TV+ drama starring Oscar winner Jennifer Lawrence. The film homes in on the relationship between a military engineer (Lawrence) recovering from the effects of a severe brain injury and an auto repair shop mechanic (Henry) living with the guilt and the physical aftereffects of a car accident. The film is available to stream on Apple TV+.

Ana de Armas receives her first nod for best actress for her portrayal of Marilyn Monroe in the adaption of Joyce Carol Oates’ novel, “Blonde.” The film is not quite a biopic of the late movie star’s life; it is more of a bruising narrative told from the perspective of director Andrew Dominik. The film is available to stream on Netflix.

“GLASS ONION: A KNIVES OUT MYSTERY”

The sequel to director Rian Johnson’s “Knives Out,” “Glass Onion: A Knives Out Mystery” features the return of Daniel Craig’s southern twang-heavy detective Benoit Blanc. The twisty whodunit does what the original did best: allow problematic and murderous rich people to measure their egos and decipher which one is a killer. The film is available to stream on Netflix.

Writer-director Charlotte Wells illustrates the bond between a father/daughter duo portrayed by first-time Oscar nominee Paul Mescal and Frankie Corio. “Aftersun” touches on the pivotal moments in an adolescent life when the world feels so big but childlike wonder starts to fade when the reality of life peeks through the cracks. “Aftersun” is a dreamy, heartwrenching debut from Wells. The film is available for rent on Amazon and YouTube.

The decades-old child’s tale “Pinocchio” gets retold through the lens of Guillermo Del Toro’s dark mind. This is not the Disney version of “Pinocchio” — in Del Toro’s still musical version, themes of fascism are explored. The cast includes Christoph Waltz, Cate Blanchett, Tilda Swinton and Ewan McGregor and it is nominated for best animated film. The film is available to stream on Netflix.

“EO” is the story of a circus donkey who is taken from his owner and begins a long, spiritual journey through the modern Polish and Italian countrysides, encountering humans both kind and cruel. It is a love letter to animals, directed by Jerzy Skolimowski. “EO” is still in limited theaters and is not yet available for streaming.

“Argentina, 1985” establishes the 1985 Trial of the Juntas, a historic moment for Argentina that helped launch the country’s democratic future after seven years of military dictatorship. Director Santiago Mitre shaped the classic political thriller into a story about preserving history and the years it takes to receive justice. The film is available to stream on Amazon.

“ALL THE BEAUTY AND THE BLOODSHED”

American photographer Nan Goldin’s life’s work is told throughout “All the Beauty and the Bloodshed,” and it’s not just about photography. Directed by Laura Poitras, this documentary dives into Goldin’s political activism and how the sticky web of the Sackler family’s philanthropic interests in the art world intersected with their pharmaceutical company Purdue Pharma, which has faced a barrage of lawsuits alleging that it helped spark an opioid addiction and overdose crisis. The film is nominated for best documentary feature. It is still in limited theaters and is not yet available for streaming.

“MARCEL THE SHELL WITH SHOES ON”

“Marcel the Shell With Shoes On,” is a feature-length, stop-motion animation film based on the YouTube shorts made by Jenny Slate, who voices Marcel in a high-pitched octave, and director Dean Fleischer Camp. The experience of being small, cute and unassuming is the heart of the film about a mollusk. The film is available to rent on Amazon.

“Turning Red” is the first Pixar movie directed solely by a woman. Helmed by Domee Shi, who also made the Oscar-winning short “Bao,” the animated film is a coming-of-age tale about a Chinese Canadian eighth-grader who turns into a big, fluffy red panda — a walking metaphor for growing young womanhood. The film is nominated for best animated film. “Turning Red” is available to stream on Disney+.

S.S. Rajamouli’s three-hour maximalist action epic “RRR” is one of India’s most expensive — and top-grossing — films of all time. It pairs two of Tollywood’s biggest stars, N.T. Rama Rao Jr. and Ram Charan, as revolutionaries fighting against the British colonialists in 1920. The film, nominated for best song, topped Netflix’s streaming charts over the summer and is still available to watch there.

For more on this year’s Oscars, visit: http://www.apnews.com/academy-awards