EXPLAINER: Islam’s ban on alcohol and how it’s applied

By MARIAM FAM The Associated Press 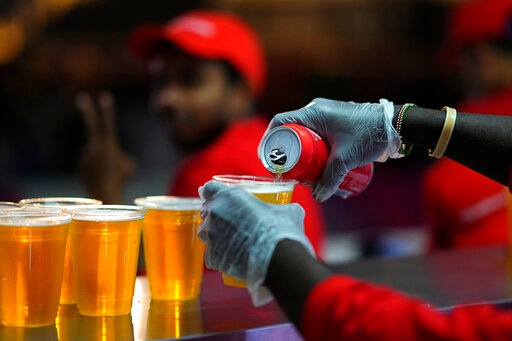 FILE - Staff member pours a beer at a fan zone ahead of the FIFA World Cup, in Doha, Qatar Saturday, Nov. 19, 2022. The last-minute decision to ban the sale of beer at World Cup stadiums in Qatar is the latest example of some the tensions that have played out ahead of the tournament. Qatari officials have for long said they were eager to welcome everybody but that visitors should also respect their culture and traditions. (AP Photo/Petr Josek)[ASSOCIATED PRESS/Petr David Josek]

DOHA, Qatar (AP) — Just two days before the World Cup opener, host nation Qatar banned the sale of beer at stadiums in a sudden U-turn that was criticized by some and welcomed by others.

Qatari officials have long said they were eager to welcome soccer fans from around the world to the tournament but that visitors should also respect their culture and traditions. Alcohol consumption, impermissible in Islam, is one of the areas where the country has been attempting to strike a delicate balance.

Here’s a look at some of the issues related to alcohol and Muslim beliefs.

WHAT DOES THE QURAN SAY ABOUT ALCOHOL?

Drinking alcohol is considered haram, or forbidden, in Islam. As proof of the prohibition, Islamic scholars and Muslim religious authorities typically point to a verse in the Quran, the Muslim holy book, that calls intoxicants “the work of Satan” and tells believers to avoid them. Additionally, they cite sayings of Prophet Muhammad and the negative effects that alcohol can have. 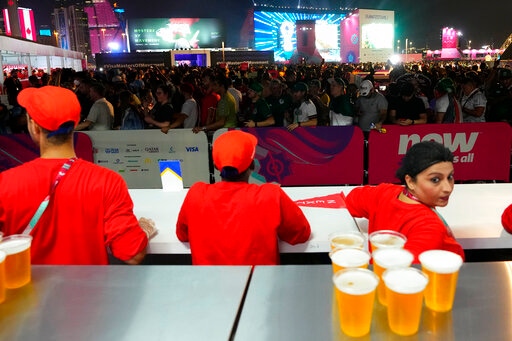 FILE - Fans wait in line for beer at a fan zone ahead of the FIFA World Cup, in Doha, Qatar Saturday, Nov. 19, 2022. The last-minute decision to ban the sale of beer at World Cup stadiums in Qatar is the latest example of some the tensions that have played out ahead of the tournament. Qatari officials have for long said they were eager to welcome everybody but that visitors should also respect their culture and traditions.(AP Photo/Petr Josek, File)

Beyond abstaining from drinking, some Muslims also seek religious edicts on a variety of related day-to-day questions or dilemmas. These include whether or not to consume food mixed with alcohol; if it’s considered a sin to work at a restaurant that serves alcohol in a Western country; if perfumes containing alcohol are allowed; and whether to attend ceremonies or events where booze is served.

While the prohibition on alcohol in Islam is believed to be widely heeded, not all Muslims abstain from drinking. Some drink, whether privately or publicly. In a Pew Research Center survey of Muslims around the globe, most people surveyed said that drinking alcohol was morally wrong. More than half in all countries where Muslims were surveyed held this view, including more than nine-in-ten in Thailand, Ghana, Malaysia, the Palestinian territories, Indonesia, Niger and Pakistan, according to the Pew report, which was published in 2013 and included 38,000 interviews. Still, in 11 of the 37 countries where this question was asked, at least one-in-ten said that drinking alcohol is morally acceptable and in some countries, sizable percentages said consuming alcohol is not a moral issue, the report added.

HOW IS THE BAN ON ALCOHOL APPLIED?

Alcohol is available in some Islamic nations though regulations vary widely and there can be intricate rules and restrictions on its sale or where it can be consumed. Some countries, like Saudi Arabia, outlaw alcohol altogether. Drinking there can be punished by flogging, fines, imprisonment and, for foreigners, deportation. The kingdom has in recent years been opening up entertainment options, which has spurred speculation about whether exceptions for alcohol consumption may be made in the future.

Other places have a more relaxed approach, such as Dubai, a top travel destination in the United Arab Emirates that is known to many for its glitz and love for superlatives. Dubai boasts a variety of bars, nightclubs and lounges that attract many visitors and well-to-do expatriate residents. In recent years, the city has also been increasingly loosening laws governing alcohol sales and possession of liquor. As in some other places, alcohol sales there provide a lucrative tax revenue source.

Alcohol is sold freely in liquor stores in Jordan and served in bars and restaurants throughout the capital of Amman. It is also available in Muslim-majority Egypt, which is traditionally popular with tourists and is home to a Christian minority. There, the young and rich can sip on cocktails or wines in beach clubs or bars, many with foreign names, while swaying to music. Wine, beer and spirits can also be ordered online among other options. Still, drinking is rejected by most; in the Pew study, 79% of surveyed Muslims in Egypt said they viewed alcohol as morally wrong.

In dry countries, some have gone to great lengths to obtain alcohol, at times risking arrest, or worse. In Saudi Arabia, home to Islam’s holiest sites, there have been reports of efforts to skirt the ban, including liquor runs by some to neighboring Bahrain. Attempts to sneak booze into the kingdom have over the years included bottles of whisky hidden in socks and cans of beer disguised as Pepsi. Some endeavors, however, end in tragedy. In 2002, 19 people in Saudi Arabia died and others were hospitalized after drinking cologne containing methanol. In Iran, some have also died from methanol poisoning after they drank toxic homemade brews.

Qatar, which like Saudi Arabia follows an ultraconservative version of Islam known as Wahhabism, has strict limits on the purchase and consumption of alcohol, though its sale has been permitted in hotel bars for years. During the World Cup, beer was originally supposed to be sold also at stadiums and at fan zones in the evenings. That changed Friday when it was announced that only non-alcoholic beer would be available at the stadiums, except for in the luxury hospitality areas where champagne, wine, whiskey and other alcohol is served. The vast majority of ticket holders don’t have access to those areas.

The World Cup in Qatar is not the first to spur debate over whether alcohol sales should be allowed in matches. For the 2014 tournament, Brazil was forced to change a law to allow alcohol sales in stadiums — but the same cultural issues were not at play. Brazil had banned alcohol sales at soccer matches in a bid to curb fan violence. Some of those who were pushing for the ban’s lifting said at the time that in-stadium beer sales were a key part of World Cup tradition.

Associated Press religion coverage receives support through the AP’s collaboration with The Conversation US, with funding from Lilly Endowment Inc. The AP is solely responsible for this content.