X-rays on Ball’s ankle negative, will miss game vs Cavaliers 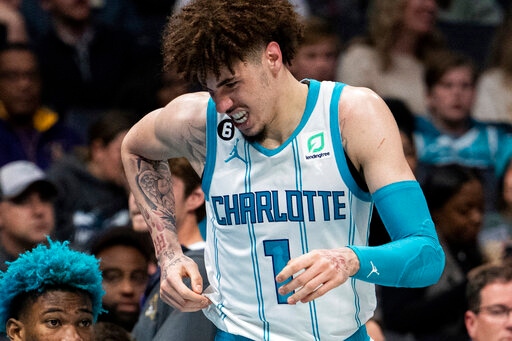 Charlotte Hornets guard LaMelo Ball reacts after being shaken up on a play during the second half of the team's NBA basketball game against the Indiana Pacers in Charlotte, N.C., Wednesday, Nov. 16, 2022. (AP Photo/Jacob Kupferman)[ASSOCIATED PRESS/Jacob Kupferman]

CHARLOTTE, N.C. (AP) — X-rays on LaMelo Ball’s left ankle were negative, but the Charlotte Hornets All-Star point guard has already been ruled out of Friday night’s game against the Cleveland Cavaliers. Coach Steve Clifford says it is too early to know how much time Ball will miss after spraining the ankle again in a 125-113 loss to the Indiana Pacers on Wednesday night. Ball first injured his ankle on Oct. 10 during a preseason game against the Washington Wizards when he stepped on an opposing players’ foot. That caused him to miss more than a month of action, including the first 13 games of the regular season.

Charlotte Hornets guard LaMelo Ball reacts after making a basket during the second half of the team's NBA basketball game against the Indiana Pacers in Charlotte, N.C., Wednesday, Nov. 16, 2022. (AP Photo/Jacob Kupferman)