By BOB SUTTON The Associated Press

Vancouver Canucks' Elias Pettersson (40) slips the puck past Carolina Hurricanes goaltender Pyotr Kochetkov (52) to win the game in a shoot out at an NHL hockey game in Raleigh, N.C., Sunday, Jan. 15, 2023. (AP Photo/Karl B DeBlaker)[ASSOCIATED PRESS/Karl B DeBlaker]

RALEIGH, N.C. (AP) — Elias Pettersson scored on the final attempt in the shootout as the Vancouver Canucks beat the Carolina Hurricanes 4-3 on Sunday night and avoided a winless five-game trip.

“They play hard because we’re all in it together,” Canucks coach Bruce Boudreau said. “They’re a good group and they want to win. It doesn’t work all the time.”

Sebastian Aho scored with 2:52 remaining in regulation to break a tie for the Hurricanes. Paul Stastny and Jordan Martinook had first-period goals for Carolina, which squandered a two-goal lead at home for the second time in a week. Pyotr Kochetkov made 29 saves and slipped to 0-3-1 in four games since winning on Dec. 20. 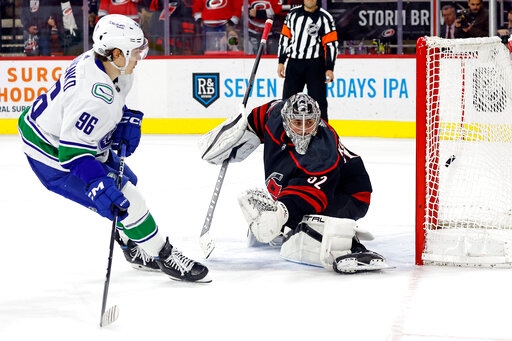 Carolina Hurricanes goaltender Pyotr Kochetkov (52) catches a shot by the Vancouver Canucks during the first period of an NHL hockey game in Raleigh, N.C., Sunday, Jan. 15, 2023. (AP Photo/Karl B DeBlaker)

The Hurricanes won twice over the previous three nights, but seemed to be lacking energy.

“We were flat, tired,” coach Rod Brind’Amour said. “I think the game (Saturday night versus Pittsburgh) we put everything into that one. But you know what, we still had the game in our hand to win it.”

The Hurricanes appeared in good shape after Aho scored his 14th of the season for a 3-2 lead at 17:08 of the third. The Canucks pulled Delia and tied the game on Boeser’s goal.

Stastny recorded his third goal of the season just 2:25 into the game. He was on the receiving end of Svechnikov’s cross-ice pass.

Martinook’s 10th goal of the season came with 34 seconds to play in the first period. He knocked in a rebound of his own shot, scoring for the first time this month.

“That’s a game if you looked at it in the first period and you weren’t involved, you would think it would have a different outcome,” Delia said.

Bear, who was honored during a first-period stoppage as a former Hurricane returning to the building, scored with 2:08 left in the second period. It was his third goal of the season.

Miller tied it with a strong individual effort. He headed for the slot and sent a shot off the post, then knocked in his own rebound for this 17th goal this season. It was his fourth goal in six games.

Hurricanes captain Jordan Staal missed a game for the first time this season. The team announced that the center’s absence was for personal reasons.

Carolina went with seven defensemen in its lineup. Staal was without a point in the last four games.

The Canucks learned that Gino Odjick, described as a legend with the team, died at age 52 stemming from an apparent heart attack. He was a fan favorite in eight seasons with the Canucks.

Bear said he had a personal connection to Odjick, who welcomed him to Vancouver when he joined the organization.

“Maybe he was there for me on that shot,” Bear said of his goal.

The Canucks allowed at least four goals in the first four games of the road trip. … Vancouver improved to 2-7-1 against Metropolitan Division opponents. … Carolina has played in a league-high 15 games that have extended beyond regulation. The Hurricanes are 7-8 in those, including 3-2 in shootouts.