By GRAHAM DUNBAR The Associated Press 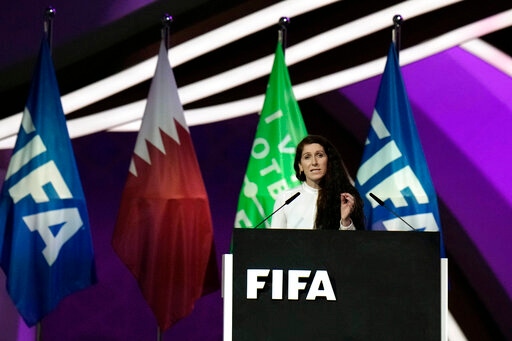 FILE - Norwegian soccer official Lise Klaveness speaks during the FIFA congress at the Doha Exhibition and Convention Center in Doha, Qatar, Thursday, March 31, 2022. Lise Klaveness, one of the few women presidents of a national soccer federation, is standing as a candidate in elections for a seat on the European governing body’s decision-making board, the Norwegian Football Federation said Wednesday, Jan. 18. 2023. (AP Photo/Hassan Ammar, File)[ASSOCIATED PRESS/Hassan Ammar]

GENEVA (AP) — The Norwegian official who made her reputation in soccer politics with a speech in Doha last year criticizing World Cup host Qatar is seeking to join the UEFA executive committee. Lise Klaveness is a lawyer and former national-team player who is one of the few women presidents of a national soccer body. The Norwegian Football Federation says she’s standing as a candidate in an April 5 election for UEFA’s decision-making board. Her speech last March at the FIFA Congress of 200 soccer nations in Qatar drew attention to the World Cup host’s human rights record.