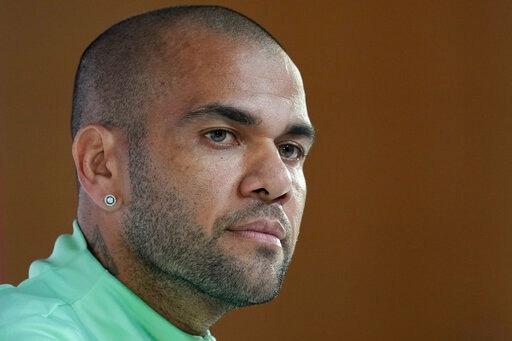 FILE - Brazil's Dani Alves listens to a question during a press conference on the eve of the group G of World Cup soccer match between Brazil and Cameroon in Doha, Qatar, Thursday, Dec. 1, 2022. Brazilian soccer player Dani Alves has been arrested after being accused of sexually abusing a woman in Barcelona it was reported on Friday, Jan. 20, 2023. Police say the alleged act took place on Dec. 31 at a night club in Barcelona. Alves will now go before a judge. The judge will decide on the charges. (AP Photo/Andre Penner, File)[ASSOCIATED PRESS/Andre Penner]

BARCELONA, Spain (AP) — The lawyer who worked for Lionel Messi in his tax fraud case has been added to the defense team of former Barcelona defender Dani Alves, who is facing sexual assault charges. Renowned lawyer Cristóbal Martell will try to help Alves in his defense against sexual assault accusations made by a woman he met at a nightclub in Barcelona on Dec. 30. Martell was part of the defense team when Messi was found guilty of tax fraud and sentenced to 21 months in prison in 2016 in Spain. Messi’s sentence was suspended and the Argentina star did not have to serve time. Alves has been in jail since Friday.