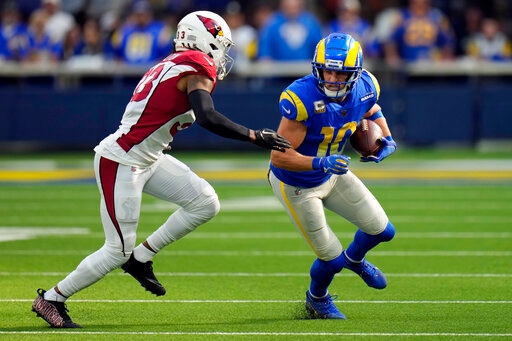 NEW YORK (AP) — Super Bowl MVP Cooper Kupp is among the 32 players nominated for the eighth annual Art Rooney Sportsmanship Award. Kupp, who had surgery for a high ankle sprain last week, caught a 1-yard touchdown pass from Matthew Stafford with 1:25 remaining to give the Los Angeles Rams a 23-20 victory over the Cincinnati Bengals last February.  Philadelphia Eagles three-time Pro Bowl right tackle Lane Johnson, who missed a few games last year while dealing with mental health issues, also is among the nominees. The award recognizes players around the league who “exemplify outstanding sportsmanship on the field.” It was created in 2014 to honor Art Rooney Sr., the late founder and owner of the Pittsburgh Steelers and a Pro Football Hall of Famer.