By CHARLES ODUM The Associated Press

ATLANTA (AP) — Marcus Mariota and the Atlanta Falcons are still under .500 and still in the thick of the NFC South race.

Younghoe Koo’s 53-yard field goal gave Atlanta the lead with less than two minutes to play and the Falcons overcame another impressive game from Chicago’s Justin Fields to beat the Bears 27-24 on Sunday.

Fields ran for 85 yards with a touchdown despite suffering a left shoulder injury on the Bears’ final possession. He was awaiting results of X-rays on the shoulder after the game and said “I’m hurting a little bit.”

Fields said he was hurt on the first play of the Bears’ possession following Koo’s go-ahead field goal. Fields remained in the game.

“I don’t know what happened, to be honest with you,” Fields said. “I just landed on it, I think. … I was hurting, but it was the last drive of the game. I tried to be there for my teammates.” 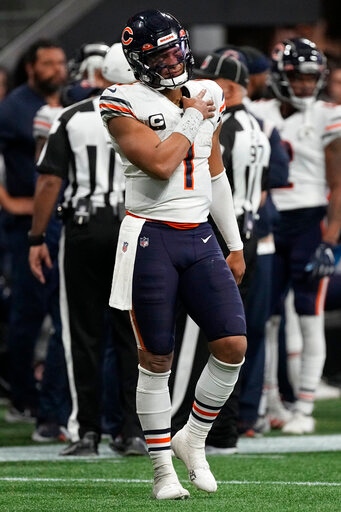 Chicago Bears quarterback Justin Fields (1) holds his shoulder after a Atlanta Falcons tackle during the second half of an NFL football game, Sunday, Nov. 20, 2022, in Atlanta. The Atlanta Falcons won 27-24. (AP Photo/John Bazemore)

Fields’ pass for running back David Montgomery was intercepted by Falcons safety Jaylinn Hawkins with 1:07 remaining. A 26-yard run by rookie Tyler Allgeier allowed the Falcons, who rushed for 149 yards, to wind down the clock.

Fields completed 14 of 21 passes for 153 yards with one touchdown and one interception.

The Bears suffered their fourth consecutive loss. Chicago (3-8) has lost six of seven.

Each quarterback had the most carries for his team. Mariota couldn’t match Fields’ dual-threat production, but he ran and threw for touchdowns for Atlanta (5-6), which pulled within one-half game of NFC South-leading Tampa Bay (5-5) on the Buccaneers’ bye week.

“It’s big for the team, and we’ve just got to keep rolling,” Hawkins said. “Everything counts.”

Atlanta running back Cordarrelle Patterson, who played for the Bears for two years before signing with the Falcons in 2021, set the NFL record with his ninth career kickoff return for a touchdown. His 103-yard return in the second quarter broke a tie with Joshua Cribbs and Leon Washington for the mark.

Patterson’s lost fumble after a 19-yard run set up Fields’ 4-yard scoring run that gave Chicago a 17-7 lead. Patterson atoned for the fumble with his record-breaking return.

“Honestly, man, the fumble — the series before that — was in my head the whole time, you know?” Patterson said. “As a football player, you’ve got to move on to the next play. I was happy when he kicked me the ball because I had just had to go out and make a spark for my team. That’s what I do.”

Koo’s 40-yard field goal on the final play of the first half tied it at 17.

Fields’ ability to extend a third-and-12 play by scrambling before passing to Equanimeous St. Brown for a 14-yard gain set up Montgomery’s 2-yard touchdown run to tie the game.

According to NFL’s Next Gen Stats, Fields ran 33.2 yards before completing the pass to St. Brown, the longest scramble on a third-down conversion in the league this season.

Fields, an Atlanta-area native, began his career at the University of Georgia before transferring to Ohio State. His homecoming came after running for a combined 325 yards in his last two games, setting a two-game NFL record for quarterbacks.

Fields said his goal is “just keep getting better. Take each day on its own and keep working to control what you can control.”

Bears: DE Trevis Gipson left early in the second quarter with a leg injury. Taco Charlton, who was signed Wednesday off waivers from the Saints practice squad, replaced Gipson. … Montgomery was removed late in the first half and escorted to the medical tent. He quickly returned to the game. … CB Kyler Gordon was escorted to the locker room with a possible head injury in the third quarter.

Falcons: DE Ta’Quon Graham was carted off the field with a left knee injury in the second quarter and was ruled out. … TE Kyle Pitts had an 18-yard catch early in the third quarter but left with a knee injury following a big hit by safety Eddie Jackson. Pitts jogged off the field before the team announced he was questionable to return.

Falcons: At Washington on Nov. 27.