By TIM REYNOLDS The Associated Press 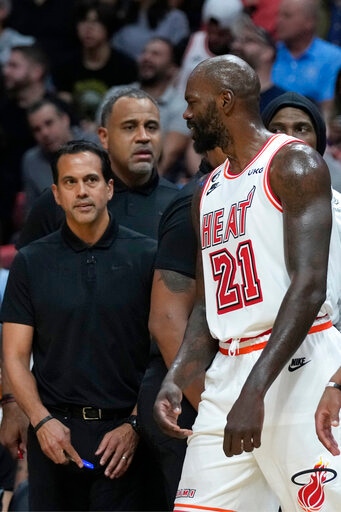 Miami Heat center Dewayne Dedmon (21) argues with head coach Erik Spoelstra before storming off the court during the first half of an NBA basketball game against the Oklahoma City Thunder, Tuesday, Jan. 10, 2023, in Miami. (AP Photo/Wilfredo Lee)[ASSOCIATED PRESS/Wilfredo Lee]

MIAMI (AP) — Reserve center Dewayne Dedmon has been suspended without pay by the Miami Heat for one game for conduct detrimental to the club. The move came one night after Dedmon had an outburst after being subbed out of a game against the Oklahoma City Thunder. He exchanged words with coaches on the sideline, then angrily swatted at a massage gun and sent it flying onto the court during play. That got him ejected from the game, further depleting an already short-handed Miami roster, and the Heat used only seven players over the final 33 minutes of what became a 112-111 victory. Dedmon will miss Miami’s home game Thursday against the Milwaukee Bucks.