By JACK THOMPSON The Associated Press

Sonny Milano and Tom Wilson each had a goal for the Capitals, who have won nine of their last 10 road games.

Arizona has dropped 10 of 11 overall. The Coyotes halted a nine-game losing streak by beating Detroit on Tuesday.

“I really enjoyed my time here and I like coming back,” Kuemper said. “A lot of good memories.” 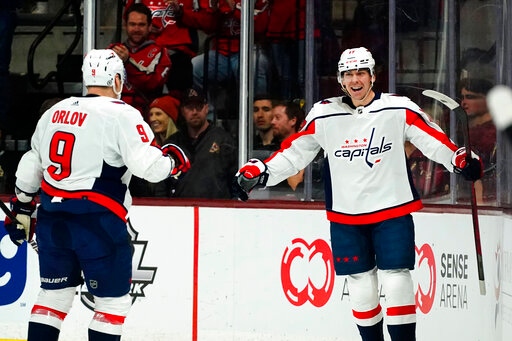 Washington Capitals left wing Alex Ovechkin, right, smiles as he celebrates a win over the Arizona Coyotes with goaltender Darcy Kuemper (35) for a shutout as time expires in the third period of an NHL hockey game in Tempe, Ariz., Thursday, Jan. 19, 2023. (AP Photo/Ross D. Franklin)

Strome, also a former Coyotes player, opened the scoring 3:10 in by beating Karel Vejmelka from close range. Dmitry Orlov and Nick Jensen assisted on the goal.

“We had a tough loss last game so it’s nice to come on the road and win, and against your old team it’s a little bit of a bonus,” Strome said.

After the early goal, it was a long wait until Milano scored on a feed from Wilson at 17:32 of the second period. Shortly after that, Arizona’s Nick Bjugstad was penalized for tripping and Washington made the Coyotes pay.

Wilson was credited with the goal, originally given to Orlov. Evgeny Kuznetsov also assisted at 18:41.

Strome, just out of the penalty box, made it 4-0 with assists from Kuznetsov and Orlov at 8:41 of the third as the Capitals won the opener of a three-game swing out West that includes visits to Vegas and Colorado.

“You’ve got to respect them, they’re working hard,” Washington coach Peter Laviolette said of the Coyotes. “The start of a trip, it’s always important to get off on the right foot.”

“We played a good team. They didn’t give us a lot of room,” Coyotes coach Andre Tourigny said. “Give a lot of credit to them.

“We need to find a way. There’s not a lack of desire, but for whatever reason we’re not as emotionally intense.”

Arizona won the previous meeting this season, 3-2 on Nov. 5 in Washington.

Each team successfully challenged a goal.

Lars Eller appeared to score for the Capitals just after a hooking penalty to the Coyotes’ Michael Carcone expired, but Arizona challenged the play and Eller was ruled to have interfered with the goaltender.

During a power play to open the third period, a shot from Shayne Gostisbehere beat Kuemper, but Washington got a reversal because Arizona was ruled offside before the goal.

“We got into some penalties (in the third period). They’ve got a good power-play unit, but we did a good job and kept them at bay,” Kuemper said.

Arizona’s Lawson Crouse, the team’s top scorer with 16 goals, sat out with an upper-body injury.

Capitals: At the Vegas Golden Knights on Saturday.

Coyotes: At the Dallas Stars on Saturday.