By TOM WITHERS The Associated Press 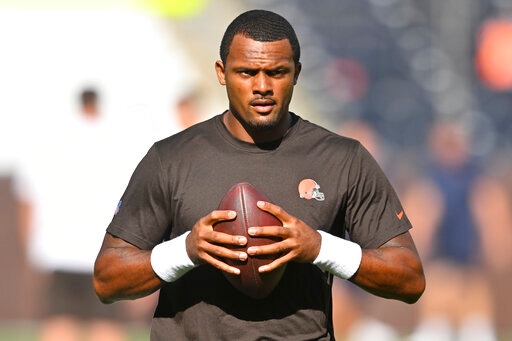 FILE - Cleveland Browns quarterback Deshaun Watson stands on the field before an NFL preseason football game against the Chicago Bears, on Aug. 27, 2022, in Cleveland. Watson can begin practicing on Monday, Nov. 14, 2022, as part of his agreement with the NFL on an 11-game suspension after being accused of sexual misconduct by two dozen women when he played for Houston. (AP Photo/David Richard, File)[ASSOCIATED PRESS/David Richard]

CLEVELAND (AP) — Cleveland Browns quarterback Deshaun Watson has been cleared to practice, a significant step in his return to the NFL following an 11-game suspension. Watson was accused of sexual misconduct by more than two dozen women during massage therapy sessions while he played for Houston. He reached a settlement with the league to sit out 11 games, pay a $5 million fine and undergo counseling and treatment. To this point, Watson has been allowed only to attend meetings and work out at the team’s facility. The Browns don’t practice until Wednesday, when Watson will rejoin his teammates on the field. As long as he continues to meet conditions of the agreement, Watson will make his debut for the Browns on Dec. 4 against the Texans, who drafted him in 2017.