Failing Private Burnham: How the Army Did Not Protect a Minnesota Soldier after a Sexual Assault

A Minnesota soldier died by suicide earlier this year after she was sexually assaulted and harassed on a U.S. Army base in South Korea, according to investigative reports obtained by 5 EYEWITNESS NEWS.

Pvt. Nicole Burnham’s death in January prompted an Army investigation that revealed a series of failures by her commanding officers. The report also shows Nicole was kept on the base for nearly three months after requesting to be transferred back to the United States.

During that time, the 21-year-old from Andover, Minn. was housed in the same barracks as her attacker and was the victim of repeated harassment and cyberbullying, according to military records. On social media, she was called a "slut, deserving of rape," records show.

Nicole’s ranking officers, who were responsible for her safety, are accused of ignoring the harassment. The investigative report also shows they failed to report Nicole’s suicidal ideations to commanders on the base.

A former military prosecutor said in an interview that the investigation shows command staff repeatedly violated policies after Nicole reported being sexually assaulted. 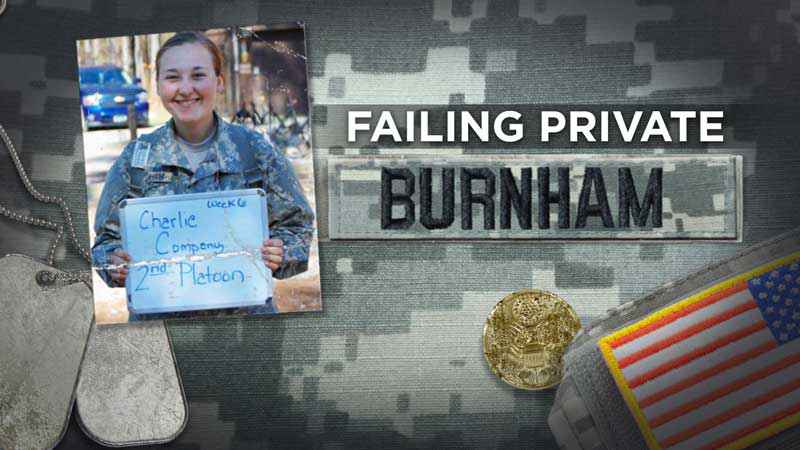 "How does this happen?" Burnham said. "How does somebody fall through every single crack?"

Nicole died on Jan. 26, 2018. She hung herself in a closet in her room weeks after arriving at Fort Carson in Colorado Springs, Colorado.

"It’s just like you see in the movies," Stacey said about the day she learned of Nicole’s death. "They knock on the door and give you the ‘I regret to inform you’ speech."

What’s left of her youngest child is an urn on the fireplace hearth and a Gold Star in the window, signifying that the family has lost a member while in the armed services. Photos that show Nicole in high school and in the service are framed and hung around the living room.

"I can put every single photo I have of her into a photo album because the last one is the last," Stacey said. "There will never be another photo of her."

Nicole enlisted in the Army in 2015, shortly after graduating from Anoka High School. Her first assignment was at Camp Casey in South Korea.

"She enjoyed Korea… She said she had a beautiful view of the mountains," Stacey said. "There was no fear, there was no hesitation."

Fellow soldiers described Nicole to Army investigators as "cheerful, down to earth," when she arrived at Camp Casey in Tongduchon, Republic of Korea.

Months later, her peers and her family members described a shift in Nicole’s personality.

‘It’s Inconceivable that They Let her Languish in Korea’

"I never, never thought another soldier that she served with would hurt her," Stacey said.

The soldier who attacked Nicole was eventually court-martialed. Burnham said the family agreed to a plea deal that resulted in the soldier receiving a less than honorable discharge.

While the Army investigated the attack, Nicole requested an Expedited Victim Transfer which allows victims of sexual assault to be transferred to another base following a credible allegation.

"I have a fear of running into the offender or people creating rumors of the incident, regardless of where I may go in Korea," Nicole wrote on her request for transfer.

Documents show a commander approved the request on September 22, but Nicole did not leave Camp Casey until Dec. 12, 2017 – 82 days later.

"The whole idea behind an Expedited Victim Transfer is just that, to expedite the process, to get them out," Stacey said.

Nicole told at least one other soldier that the transfer was "taking too long," according to investigative records.

"It’s inconceivable that they let her languish in Korea," said Don Christensen, president of Protect our Defenders, a Washington D.C. based non-profit dedicated to ending sexual assault and harassment in the military.

"The military can get forces to a country in a time of conflict in a matter of hours," he said. "They should be able to get a single soldier…out of an installation within hours."

While she waited to be transferred, Nicole "remained in the same barracks…" as did her attacker.

Army investigators concluded there was no evidence that commanding officers considered separating the two until October, when Nicole’s attacker "allegedly jumped out to scare and intimidate her."

"Again, it was just a falling through yet another crack," Stacey said in response to the investigative findings from the Army.

Nicole was moved to new barracks at Camp Casey but in the weeks that followed, she was subjected to harassment from within the ranks including from her attacker, fellow soldiers and their wives.

However, in a sworn statement, a fellow soldier said "most of the [officers] were aware of the derogatory statements, harassment and intimidation… yet they turned a blind eye."

Not only did superior officers know about the harassment, they knew Nicole may have been suicidal, according to the report.

In October 2017, while waiting to be transferred, Nicole made a "specific suicidal ideation," stating that "she couldn’t take it anymore," records show.

Investigators found a commander violated Army policy by not reporting those comments up the chain of command, thus "preventing more accurate assessments" of Nicole’s emotional state.

Stacey said she could tell her daughter was suffering when she spoke to her on the phone but did not know about the suicidal comments, or the military’s failure to address them, until months later when the Army finished its investigation.

"There were times when [Nicole] would admit that, ‘I just didn’t want to talk to anybody, I’m depressed, I really don’t leave my room,’" Stacey said. "She never talked about being suicidal. It was more just like, ‘I can’t wait to get out of here.’"

When Nicole was finally transferred off the base last December, Army investigators found her commanders failed again. The report shows they did not alert staff at Fort Carson that she was a victim of sexual assault.

"The people who were supposed to be there helping her just did not seem to care," Burnham said.

If you know of any issues involving members of the U.S. military from Minnesota, please contact Kirsten Swanson, the reporter on this story. You can reach her via email at kswanson@kstp.com.

Note: This timeline is based on the Army’s investigation into Nicole’s death and the events that led up to her suicide. It includes events that happened at both Camp Casey in Korea and at Fort Carson in Colorado.

Jan. 25, 2018 – Nicole is informed that there is a chance she’d have to testify telephonically in a court-martial hearing for the soldier who attacked her. A fellow soldier who Nicole had served with in Korea receives messages from her, stating "you won’t hear from me tonight," and "you won’t hear from me tomorrow." The unidentified soldier sends Stacey Burnham a message, relaying his concerns about Nicole’s well-being.

Jan. 26, 2018 – Stacey Burnham reaches military police at Fort Carson and requests a welfare check on Nicole. Nicole is pronounced dead just after 7:30 a.m., after police found her hung from her closet in her room.